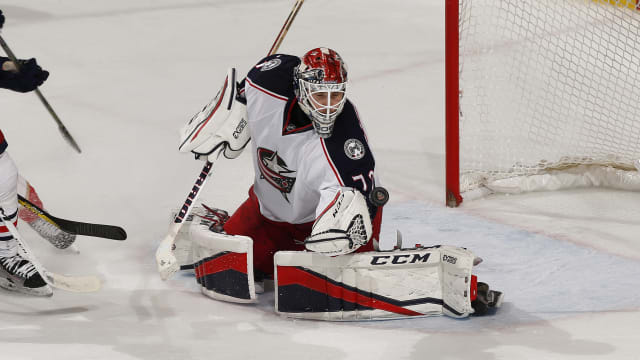 The Columbus Blue Jackets and Minnesota Wild continued their stunning winning streaks in the NHL on Thursday.

The Blue Jackets tied the third-longest streak in NHL history as a 5-3 win over the Winnipeg Jets marked their 14th consecutive victory.

The Wild are on a 12-match winning run after overcoming the New York Islanders 6-4 at Xcel Energy Center.

The Toronto Maple Leafs are only just starting their streak, extending it to four wins by edging the Tampa Bay Lightning.

Alexander Wennberg scored twice for the Blue Jackets, who had fallen behind early against the Jets.

By the time Wennberg had scored his goals, they were 4-1 up and cruising to yet another win.

The Wild had to rally to keep their run alive.

The Islanders led 2-1 and then came from 4-2 down to tie the game, but late goals from Erik Haula and Mikael Granlund saw Wild secure their win.

The Maple Leafs recorded a 3-2 overtime win against the Lightning.

Auston Matthews and Tyler Bozak scored before Brian Boyle and Ondrej Palat tied the game for the Lightning.

But, with one minute, 23 seconds left in OT, Nazem Kadri netted the game-winner.

There's no stopping the @BlueJacketsNHL lately.

Patrick Kane had a goal and an assist to bring up 700 NHL points as the Chicago Blackhawks overcame the Nashville Predators 3-2.

The Boston Bruins had a 4-2 win against the Buffalo Sabres, the New Jersey Devils had a 2-1 shoot-out victory over the Washington Capitals and the Montreal Canadiens needed overtime to beat the Florida Panthers 3-2.

The Detroit Red Wings beat the Ottawa Senators 3-2 after OT, the Dallas Stars were 4-2 winners against the Colorado Avalanche, the New York Rangers recorded a 6-3 win against the Arizona Coyotes, the Edmonton Oilers overcame the Los Angeles Kings 3-1 and the Anaheim Ducks scored twice in the third period for a 3-1 win over the Calgary Flames.