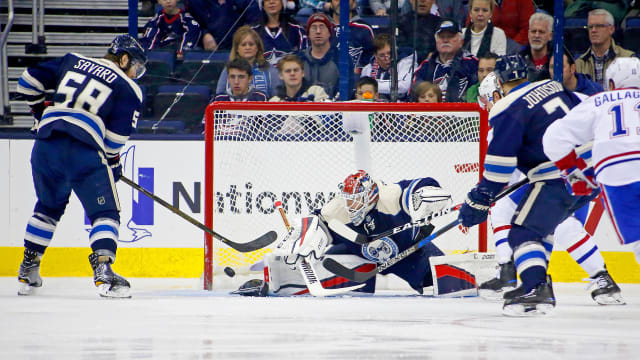 The Blue Jackets stretched their run to 12 consecutive victories by overcoming the Montreal Canadiens 2-1 thanks largely to Sergei Bobrovsky.

The Wild are on a run of their own, their 10th-straight win coming courtesy of a 7-4 victory against the New York Rangers.

Bobrovsky made 36 saves to see the Blue Jackets to their latest win.

Sam Gagner scored in a power-play before a second-period Brandon Saad goal, with Jeff Petry able to get past Bobrovsky in the third.

But the Blue Jackets saw out yet another win, to see them go into the Christmas break atop the NHL standings.

The Wild's run is the longest in their history.

But it took a remarkable second period, during which seven total goals were scored - five by the Wild - to secure the win.

Crosby netted yet again as the Penguins overcame the New Jersey Devils 4-1.

He has an NHL-leading 24 goals in 29 games, while he has scored in three straight for Pittsburgh.

These days, it seems everything Crosby touches lights the pic.twitter.com/Rb33yd6QSv

The Hurricanes edged the Boston Bruins 3-2, the Avalanche overcame the Chicago Blackhawks 2-1 and the Stars beat the Los Angeles Kings 3-2.

The New York Islanders cruised past the Buffalo Sabres 5-1, the Washington Capitals shut out the Tampa Bay Lightning 4-0 and the Detroit Red Wings had a 4-3 shoot-out win against the Florida Panthers.

The Toronto Maple Leafs were 4-1 winners against the Arizona Coyotes, the Vancouver Canucks went down to the Calgary Flames 4-1 and the San Jose Sharks had a 3-2 OT win against the Edmonton Oilers.

The NHL takes a break until Tuesday, when the season resumes with 10 games.