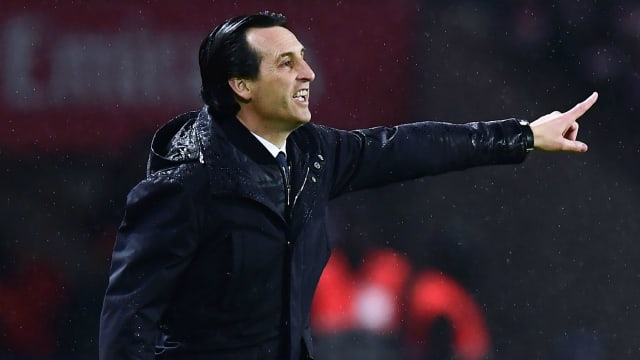 PSG returned to form with a 5-0 rout of Lorient at the Parc des Princes as the defending champions ended their three-game winless streak in the league.

It has been a topsy-turvy campaign for third-placed PSG but Thomas Meunier, Thiago Silva, Edinson Cavani and Lucas Moura were all on target, while Zargo Toure scored an own goal, to close the gap to Ligue 1 leaders Nice to five points heading into the mid-season break.

Speaking afterwards, Emery said: "It was important to take three points for the confidence of the team and the championship.

"The team had confidence, we improved things. We won and we will try to continue to improve. Outside, we have already lost four away matches [Monaco, Toulouse, Montpellier, Guingamp] and we will have to offer a more compact block.

"I saw a very involved group but we have already lost some important points and we will have to lose less for the continuation of the championship. But it was important that the players demonstrated involvement and motivation. We are third and we need to improve and reduce this distance.

"We played a lot of matches, we had tough times, good ones too, there were wounds, and the holidays will allow us to forget a little football to come back stronger and improve.

"It is normal that fans feel the need to express themselves [about whistles before the game]. It is up to us to work to find the right way and make them happy."

Meunier opened the scoring in stunning fashion approaching the half-hour mark in the French capital.

The Belgian full-back produced a sublime lob in the 25th minute and he insisted it was no fluke.

"I meant it. I took a look at the goalkeeper and I saw there was nobody in the middle," Meunier told Canal+. "This is my first goal in Ligue 1, it's special."