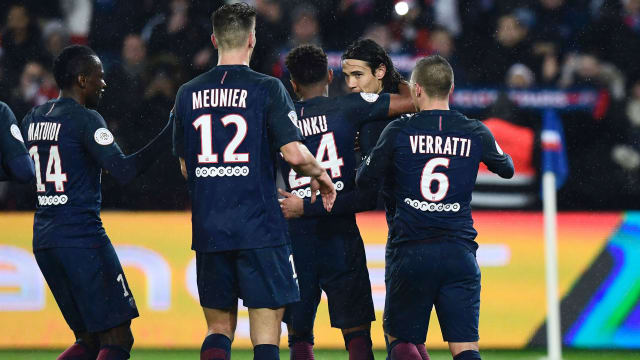 Paris Saint-Germain returned to form in scintillating fashion on Wednesday with an emphatic 5-0 thrashing of Lorient at the Parc des Princes, closing the gap to Ligue 1 leaders Nice to five points.

Defending champions PSG took full advantage of Nice's goalless draw away to Bordeaux to eke two points out of the pacesetters' advantage, but a 2-1 win for Monaco at home to Caen means Unai Emery's men head into the mid-season break in third position.

After a 2-1 defeat at Guingamp last Saturday left Emery under pressure and his team without a win in three top-flight fixtures, the PSG coach's name was whistled by supporters ahead of kick-off.

However, a sublime lob from Thomas Meunier and an own goal by Zargo Toure helped get the home faithful back on side before half-time, while Kevin Trapp was untested throughout.

Thiago Silva extended PSG's advantage five minutes after the restart with a pinpoint header, and Edinson Cavani won and converted a penalty to increase their advantage with his 18th top-flight strike this term.

Lucas Moura made the most of being picked ahead of Angel Di Maria by putting in a fine display that he capped by rounding off the scoring with 20 minutes remaining, lifting a delightful finish over Lorient goalkeeper Paul Delecroix.

In an open start to proceedings the first chance fell to Layvin Kurzawa in the eighth minute, the unmarked left-back steering a header from Lucas' outswinging corner wide.

Cavani's touch let him down in a potential one-on-one and Silva had a shot deflected wide off Vincent Le Goff as PSG cranked up the pressure.

The breakthrough came when Meunier controlled Blaise Matuidi's cross-field ball and looped it over Majeed Waris, taking a touch with his chest before lobbing an excellent finish over Lorient goalkeeper Delecroix and inside the far post from out wide on the right.

Delecroix made a vital intervention to deny Christopher Nkunku, but he was unable to stop Lorient going into the break two goals down. Lucas raced away from Le Goff on the right and his square ball for Cavani was inadvertently sent into the back of the net by Toure.

Lucas missed a chance to add a third in first-half stoppage time, his reactions not quick enough to head home after Delecroix flapped at Matuidi's cross.

The third goal came just five minutes after the restart, though. Silva attacked the near post at a corner and glanced a header across Delecroix and in off the upright.

Cavani had endured a frustrating night, but he won a penalty when he went down under a challenge from the onrushing Delecroix. The goalkeeper was booked for failing to win the ball and the Uruguayan slotted home confidently with 63 minutes played.

Lucas was next to get in on the act, the Brazilian beating the offside trap to latch onto Marco Verratti's precision pass and lob Delecroix.

Silva was denied an acrobatic second by a goal-line block from Sylvain Marveaux, but five goals may well be enough to lift the malaise in the French capital.