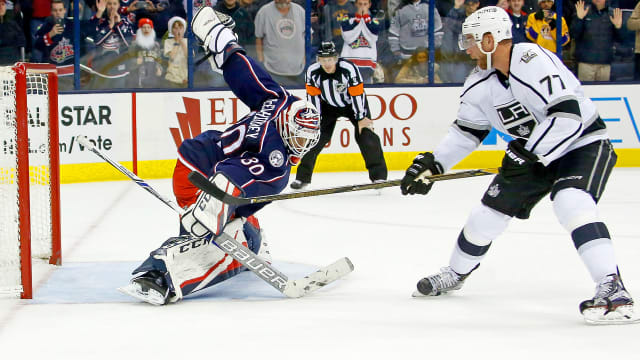 Goaltender Curtis McElhinney starred as the Blue Jackets won their record-breaking 10th consecutive game after seeing off the Los Angeles Kings 3-2 in a shoot-out on Tuesday.

Florida Panthers veteran Jagr tied Mark Messier for second place on the league's scoring list in the 4-3 shoot-out victory over the Buffalo Sabres.

Reigning Stanley Cup champions the Pittsburgh Penguins had seven individual goalscorers in their 7-2 rout of the New York Rangers.

Columbus extended their winning streak thanks to McElhinney.

After stopping 44 shots, McElhinney stopped two of three attempts in the shoot-out against the Kings.

With his three assists against the Sabres, Jagr matched Messier's haul of 1,887 points.

"When I retire, I'll look back at what I did, maybe I'm going to think about it a little more, but right now I just enjoy every moment I get a chance to play in this league and try to do everything I can to stay in this league," Jagr said.

Pittsburgh had seven different goalscorers in their drubbing of the Rangers.

CROSBY ON A ROLL

Wheeler has some wheels. #WPGvsVANpic.twitter.com/y3JqNCLP3D

The Minnesota Wild posted their eighth consecutive victory after blanking the Colorado 2-0, while the Chicago Blackhawks and their winning run ended at five game following their 4-3 loss to the Ottawa Senators.

Elsewhere, the Nashville Predators accounted for the New Jersey Devils 5-1, the Montreal Canadiens crushed the Anaheim Ducks by the same scoreline, the New York Islanders beat the Boston Bruins 4-2, the Detroit Red Wings lost 4-1 to the Tampa Bay Lightning, the St Louis Blues edged the Dallas Stars 3-2 in overtime, the Vancouver Canucks eased past the Winnipeg Jets 4-1 and the San Jose Sharks trumped the Calgary Flames by the same scoreline.

The Philadelphia Flyers host the Washington Capitals on Wednesday, while the Edmonton Oilers face the Arizona Coyotes in the only other game scheduled.