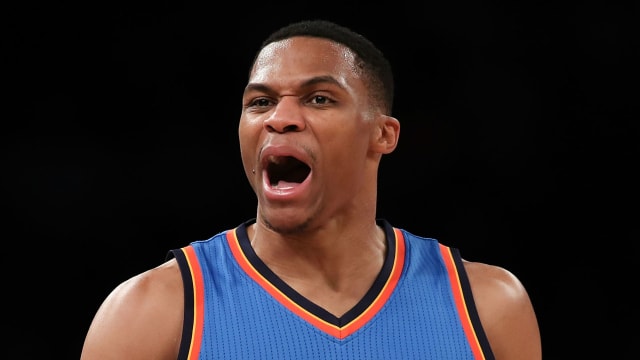 Russell Westbrook became just the sixth player in NBA history to reach 50 triple-doubles as he starred in the Oklahoma City Thunder's win over the Phoenix Suns.

Elsewhere, the Cleveland Cavaliers improved to 19-6 on the season after a 119-108 victory over the Los Angeles Lakers.

The Lakers dropped to 11-19 with this latest defeat, which came despite the best efforts of Nick Young, who top-scored with 32 points.

WESTBROOK FAR TOO HOT FOR THE SUNS

Another day, another outstanding performance from Westbrook.

The Thunder superstar recorded triple-doubles in seven consecutive games earlier in the season - a run that only came to an end last weekend.

This was his 13th triple-double of the season.

USUAL SUSPECTS THE KEY FOR CAVS

Once again, the fearsome trio of LeBron James, Kevin Love and Kyrie Irving came up big for the Cavs.

Love contributed 27 points and 17 rebounds, while James made 26 points of his own and Irving added 12 assists to his 21 points.

It was a one-sided affair at the Oracle Arena as the Golden State Warriors hammered the Portland Trail Blazers 135-90.

Kevin Durant had a big game for the home side, racking up 34 points and 11 rebounds, while Ian Clark contributed 23 points and Steph Curry 19.

Meanwhile, there were wins for the Indiana Pacers, Charlotte Hornets and the Denver Nuggets. The Houston Rockets overcame the Minnesota Timberwolves 111-109 after overtime.

Belinelli gets the circus shot to go! #BuzzCity#NBAVinehttps://t.co/WrfBdx2oEB

The San Antonio Spurs will look to close the gap to the Warriors atop the Western Conference when they take on the New Orleans Pelicans on Sunday.