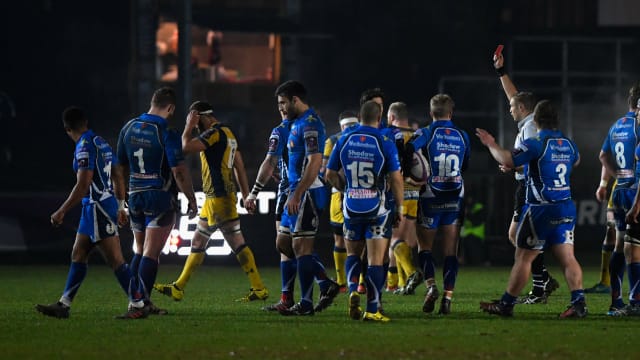 Sam Betty's 16th-minute red card proved costly for Worcester Warriors as the Dragons recorded a 22-7 win to climb from fourth to second in Pool 3 of the European Challenge Cup.

Worcester opened the scoring at Rodney Parade on Friday through Connor Braid, but were pegged back before Betty displayed a spectacular lack of discipline.

The Warriors flanker landed two punches on Rynard Landman during a mass brawl and was duly dismissed to leave his team facing an uphill battle.

Replacement Tyler Morgan and Sam Hobbs added to Tavis Knoyle's earlier score to ensure the Dragons took advantage and the Welsh region are now firmly back in contention for a place in the knockout stages.

16' There are fisticuffs in the middle of the pitch and Sam Betty is shown red.. Warriors down to 14-men for the rest of the match.

Brive are five points clear at the top of Pool 3 after they completed a double over Enisei-STM with a resounding 38-18 triumph at Stade Amedee-Domenech.

Taku Ngwenya scored two of the six tries that secured a comfortable bonus-point win for Brive, who saw Wilhelm Steenkamp yellow-carded on a night when three Enisei players were sin-binned.

Premiership strugglers Bristol built on last weekend's victory over Pau by beating the French side 28-18, Tom Varndell taking his tally of tries in the Champions and Challenge Cups to 42 with a hat-trick.