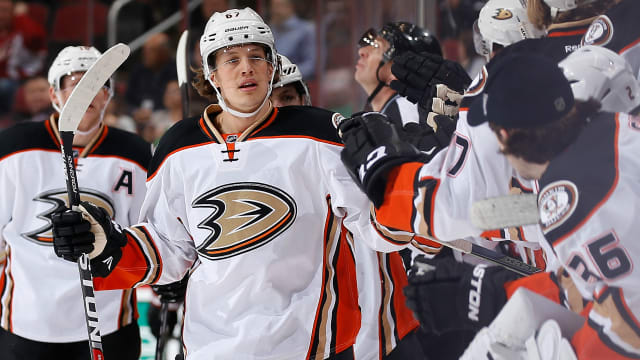 The Anaheim Ducks continued their domination of the Boston Bruins, while the St Louis Blues heaped more misery on the New Jersey Devils.

Rickard Rakell helped the Ducks to a 4-3 win over the Bruins in the NHL on Thursday.

Anaheim's triumph on the road extended their winning streak against the Bruins to six games.

The Devils crashed to a fourth consecutive defeat, swept aside 5-2 by the Blues.

There were also wins for the Chicago Blackhawks and the Los Angeles Kings.

Not since October 2013 have the Bruins got the better of the Ducks.

Rakell ensured that run continued with his game-winner at TD Garden after he converted a rebound five minutes into the second period.

Jonathan Bernie made 31 saves for the Ducks, who also relied on goals from Andrew Cogliano, Kevin Bieksa and Josh Manson.

Leading 2-0, there was cause for optimism among New Jersey fans.

But their hopes of returning to winning ways were dashed by the Blues, who scored five unanswered goals in St Louis.

Artemi Panarin scored twice on the power play as the Blackhawks outlasted the New York Islanders 5-4.

Chicago made the most of their power plays, capitalising on all three of the Islanders' penalties.

TASARENKO PUTS IT ON A PLATTER

Tyler Toffoli scored twice to see the Kings past the Detroit Red Wings 4-1, while the Arizona Coyotes overcame the Toronto Maple Leafs 3-2 in a shoot-out.

The New York Rangers blanked the Dallas Stars 2-0, the Minnesota Wild accounted for the Nashville Predators 5-2 and the Florida Panthers lost 4-3 to the Winnipeg Jets in a shoot-out.

PENGUINS BACK ON THE ICE

Defending champions the Pittsburgh Penguins host the Kings on Friday, the Washington Capitals take on the Carolina Hurricanes, the Montreal Canadiens face the San Jose Sharks, while the Columbus Blue Jackets and the Calgary Flames are in action.