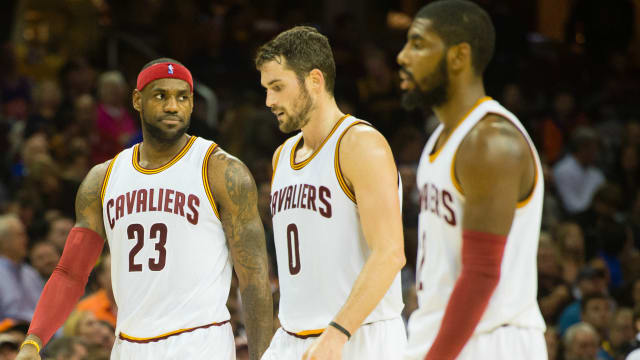 LeBron James, Kyrie Irving and Kevin Love were rested as reigning NBA champions the Cleveland Cavaliers went down to the Memphis Grizzlies, while the Houston Rockets made it eight wins in a row.

The Cavs left James, Irving and Love at home in Cleveland and they lost 93-85 to the Grizzlies in Memphis on Wednesday.

James Harden's triple-double helped the streaking Rockets to a 132-98 rout of the Sacramento Kings.

The Los Angeles Clippers extended their winning streak to three games thanks to a 113-108 victory against the Orlando Magic, while the San Antonio Spurs were too good for the Boston Celtics 108-101.

As for the Oklahoma City Thunder, they lost again.

WHAT DO YOU EXPECT WHEN RESTING LEBRON AND CO?

With all eyes on another expected playoff run, Cleveland opted against James, Irving and Love backing up on court 24 hours after their win over the Grizzlies on Tuesday.

And it was only ever going to end one way against a Grizzlies team, who won for the seventh time in eight games.

The NBA has become so flooded with triple-doubles that it is hardly even newsworthy anymore. Unless, of course, it happens to tie the likes of Hakeem Olajuwon for a franchise record.

That is exactly what Harden did in the demolition of the Kings when he recorded 15 points with 14 assists and 11 rebounds for his 14th triple-double in a Rockets uniform, tying him with the legendary centre.

It is also Harden's fifth triple-double already this season, which tops Olajuwon's single-season franchise record. The Rockets have played 26 games.

And it was all thanks to Austin Rivers and his sublime shooting.

Rivers posted 25 points, with seven-for-10 shooting from three-point range and nine-of-12 from the field.

SIT BACK AND ENJOY!

Kawhi Leonard was at his best again, scoring 26 points as the Spurs won for the fifth time in seven outings.

Veteran Pau Gasol chipped in with 17 points and 13 rebounds.

Avery Bradley's 25 points and 10 rebounds were not enough for the Celtics.

Russell Westbrook and the Thunder slumped to back-to-back defeats after going down 109-89 to the Utah Jazz.

The Toronto Raptors recorded their fourth successive win by seeing off the Philadelphia 76ers 123-114, the Washington Wizards edged the Charlotte Hornets 109-106, the Indiana Pacers lost 95-89 to the Miami Heat, the Brooklyn Nets trumped the Los Angeles Lakers 107-97, while the Detroit Pistons overcame the Dallas Mavericks 95-85.

THREE IN A ROW?

The in-form Golden State Warriors host the New York Knicks and the Spurs take on the Phoenix Suns among other games on Thursday.