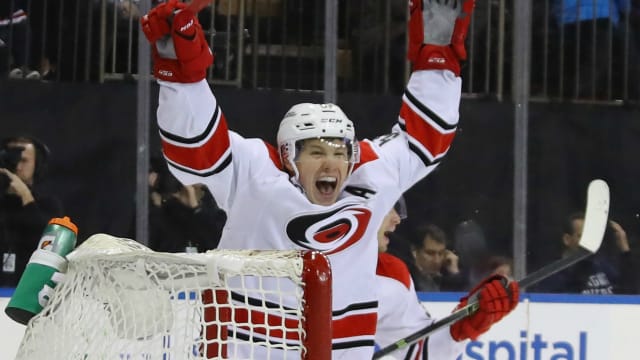 The Carolina Hurricanes and the Vancouver Canucks played out a 14-goal thriller in the NHL, while the Columbus Blue Jackets extended their winning streak.

The Blue Jackets won their seventh game in succession thanks to a 3-1 victory against the Edmonton Oilers.

A two-goal third period helped the San Jose Sharks past the Toronto Maple Leafs 3-2 in a shoot-out.

The Washington Capitals, meanwhile, made it five wins on the bounce with a 4-2 triumph at the New York Islanders.

HURRICANES USE DOMINANT FINAL PERIOD TO SEE OFF CANUCKS

Trailing 5-2 and with their backs against the wall, the Hurricanes scored six goals in the third period.

Carolina scored four goals in less than five minutes of the final period as the Hurricanes snapped a seven-game losing streak against the Canucks.

Skinner scored twice for the Hurricanes, while Victor Rask and Justin Faulk had a goal and two assists apiece.

Sam Gagner scored a goal and tallied an assist to help the streaking Blue Jackets roll on.

Cam Atkinson and Matt Calvert were also on the scoresheet as the Blue Jackets improved to 8-0-1 over the past nine games.

The Sharks faced a 2-0 deficit at the start of the third period but they were not to be denied.

Matt Niskanen was the hero for the Capitals on Tuesday.

He scored twice in the third period to guide the Caps past the Islanders and to another victory.

The Preds knocked in 6 goals in a row for a huge come back. #STLvsNSHpic.twitter.com/TKfcIE5adW

Now that's how you drive to the net. pic.twitter.com/fttkURq0v0

The Nashville Predators were 6-3 winners over the St Louis Blues and the Buffalo Sabres defeated the Los Angeles Kings by the same scoreline.

Elsewhere, the Chicago Blackhawks edged the New York Rangers 2-1, the Minnesota Wild accounted for the Florida Panthers 5-1, the Dallas Stars downed the Anaheim Ducks 6-2 and the Arizona Coyotes crushed the Detroit Red Wings 4-1.

The in-form Philadelphia Flyers take on the Colorado Avalanche on Wednesday, while reigning champions the Pittsburgh Penguins meet the Boston Bruins.