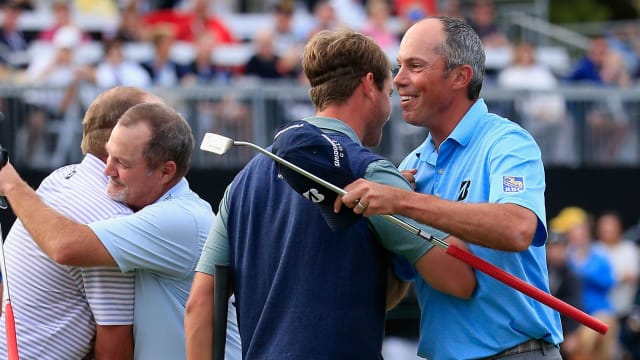 Harris English and Matt Kuchar were crowned Franklin Templeton Shootout champions for a second time after sealing a one-shot victory on Saturday.

The American duo had an advantage of just a solitary stroke heading into the final better-ball round and finished off the job in Naples.

Harris and Kuchar, also winners of this tournament three years ago, were 28 under for the week after signing for a seven-under 65, denying Jerry Kelly and Steve Stricker by the narrowest of margins.

The winning pair pocket $385,000 for their exploits at the Tiburon Golf Club, where Charley Hoffman and Billy Horschel were third on 26 under.

Kelly almost forced a play-off at the last when his 30-foot birdie putt came agonisingly close to dropping.

Kuchar was left the task of sinking a routine putt for the tournament and made no mistake, ensuring the team who were runners-up up in each of the last two years went one better this time around.

Defending champions Jason Dufner and Brandt Snedeker could only finish down in eighth.