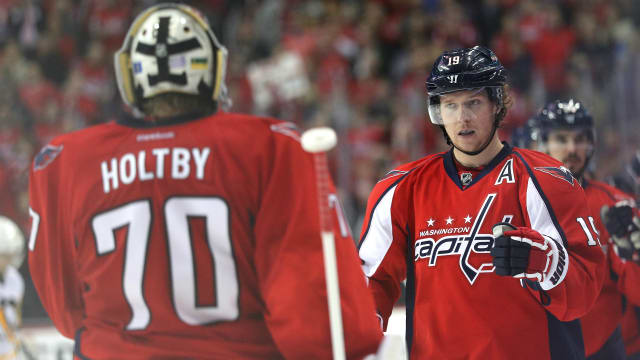 The Washington Capitals emerged triumphant in overtime against the Boston Bruins, while the Minnesota Wild held off the Toronto Maple Leafs.

Nicklas Backstrom scored less than two minutes into OT to lift the Capitals past the Bruins 4-3 on Wednesday.

Goaltender Devan Dubnyk stopped 35 shots to help the Wild to a 3-2 win at the slumping Leafs.

When it comes to facing the Bruins, the Capitals love it.

The Capitals were led by Justin Williams and his brace, while Braden Holtby made 31 saves.

Of Dubnyk's 35 saves, 17 of them came during the third and final period.

It was a fitting display for Dubnyk, who celebrated his 300th NHL start in style.

Eric Staal also impressed as the Leafs crashed to a third consecutive loss.

Some slick passing and a @backstrom19 finish gave the @Capitals a big OT win. #RivalryNightpic.twitter.com/DVeumNqqEA

The Ottawa Senators beat the San Jose Sharks 4-2, while the Anaheim Ducks prevailed 6-5 in a shoot-out against the Carolina Hurricanes.

ALL EYES ON PHILADELPHIA

The streaking Philadelphia Flyers will put their six-game winning streak on the line when they host the Edmonton Oilers on Thursday. Also in action are the Calgary Flames against the Arizona Coyotes, the Pittsburgh Penguins at the Florida Panthers, while the Tampa Bay Lightning face the Vancouver Canucks.