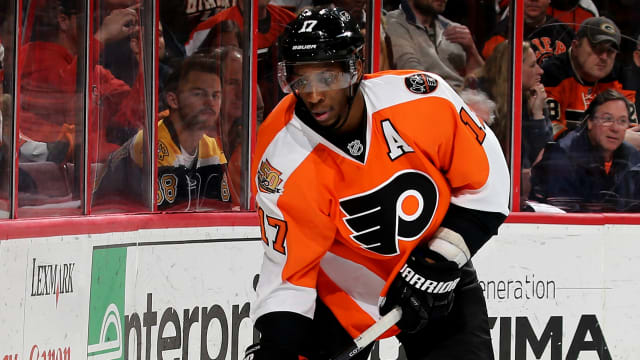 The Philadelphia Flyers made it five NHL wins in a row with victory over the Nashville Predators, while the New York Islanders and their unbeaten streak came to an end.

Philadelphia extended their winning streak after accounting for the Predators 4-2.

The Islanders' three-game undefeated run was snapped by the Detroit Red Wings, who triumphed 4-3 in overtime.

There were also wins for the Montreal Canadians and the Carolina Hurricanes.

There is no stopping Philadelphia at the moment.

Wayne Simmonds scored twice as the Flyers extended their winning streak in Nashville.

The Predators have lost three of their past four games.

The Red Wings had to dig deep but they got the job done in overtime.

Danny DeKeyser scored with less just under four minutes remaining in overtime to see the Red Wings past the Islanders.

The Red Wings were also led by Mike Green's two goals, while Anders Lee, Johnny Boychuk and Josh Bailey were all on target for the Islanders.

A shoot-out was needed in Los Angeles and the Canadiens came out on top.

Paul Byron scored in the fourth round of the shoot-out to lift the Canadiens to a 5-4 win against the Kings.

A beautiful pick of the top corner gives the @DetroitRedWings a big victory. #DETvsNYIpic.twitter.com/kumMKGWMDO

Just a nasty move in the shootout.

Radulov was a pretty good pick up for the @CanadiensMTL. pic.twitter.com/X0pNpydVDv

Cam Ward made 30 saves as the Hurricanes blanked the Tampa Bay Lightning 1-0 for their sixth successive win on home ice.

The Winnipeg Jets beat the Chicago Blackhawks 2-1, the Calgary Flames crushed the Anaheim Ducks 8-3, while the Minnesota Wild trumped the Edmonton Oilers 2-1.

After back-to-back wins, reigning champions the Pittsburgh Penguins host the Ottawa Senators on Monday. The Washington Capitals entertain the Buffalo Sabres, the Boston Bruins face the Florida Panthers, while the Arizona Coyotes take on the Columbus Blue Jackets.