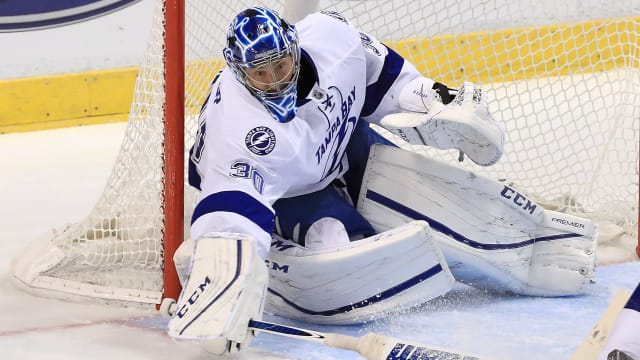 The Tampa Bay Lightning ended their losing streak, while reigning champions the Pittsburgh Penguins rallied past the Detroit Red Wings on an action-packed day in NHL.

After four consecutive defeats, the Lightning returned to winning ways thanks to a 2-1 shoot-out victory against the Washington Capitals on Saturday.

Ryan Miller starred as the Vancouver Canucks trumped the Toronto Maple Leafs 3-2 in a shoot-out.

The Columbus Blue Jackets also won a shoot-out, while the Winnipeg Jets and the New Jersey Devils prevailed in overtime.

BISHOP THE HERO IN TAMPA

The Lightning needed a win and a big performance on Saturday.

They got both thanks to goaltender Ben Bishop, who made 34 saves.

Brian Boyle scored the deciding goal in the fourth round of the shoot-out.

Trailing 3-1 at the start of the third period, the Penguins were up against it.

But Penguins pair Nick Bonino and defenseman Justin Schultz tied the game at 3-3 before Phil Kessel and Matt Cullen completed the comeback.

Miller was the hero in Vancouver.

The goalie stopped 38 saves through overtime and made another two saves in the shoot-out to see the Canucks to their third win in four games.

Well that's one way to do it. pic.twitter.com/a89qsRA5Hv

The Blue Jackets edged the Arizona Coyotes 3-2 in a shoot-out, the Jets outlasted the St Louis Blues 3-2 in overtime, while the Devils defeated the Nashville Predators 5-4 in OT.

Elsewhere, the Boston Bruins beat the Buffalo Sabres 2-1, the Philadelphia Flyers upstaged the Chicago Blackhawks 3-1, the Ottawa Senators blanked the Florida Panthers 2-0, the Carolina Hurricanes lost 4-2 to the New York Rangers, the Dallas Stars shut out the Colorado Avalanche 3-0, while the Anaheim Ducks went down 3-2 to the Edmonton Oilers in overtime.

START OF A WINNING STREAK?

Back winning games, the Lightning face the Hurricanes on Sunday. The Blackhawks meet the Jets, while the Montreal Canadiens take on the Los Angeles Kings.