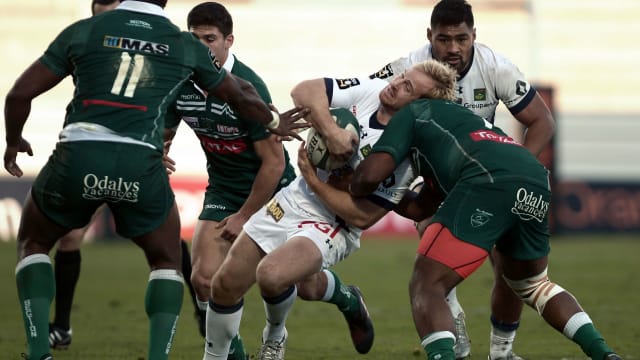 Clermont Auvergne's Top 14 wobble continued as they were beaten 40-35 by Pau at Stade du Hameau, despite a hat-trick from David Strettle.

Last season's regular-season table-toppers are once again at the head of the pack, but they have now lost two of their last three games to keep their advantage in check.

Pau have spent much of the season looking over their shoulders at the bottom two, but they turned expectations on their head as early as the third minute when Fijian wing Watisoni Votu scored the opening try.

Strettle got two of his three scores before the interval, but Colin Slade and Conrad Smith kept the hosts in front each time.

It was the same story in the second half, with Clermont only able to answer Pau scores to see them fall to defeat ahead of next week's European Champions Cup clash with Ulster.

"You have to take your hat off to Pau, they played a full match and took us for 40 points," Clermont coach Franck Azema was quoted as saying by AFP.

"It's not the best way to prepare for the European Cup."

Montpellier moved up to second with a 51-37 win at Grenoble.

Montpellier coach Jake White was not the Stade des Alpes, with French reports claiming the South African was hospitalised with illness.

Though the rock-bottom hosts scored with regularity, Montpellier found their way through time and again, running in seven tries to get the best of a high-scoring encounter.

Will Genia, barred by his club from representing Australia against England at Twickenham on Saturday, opened the floodgates in the third minute as 2015 champions Stade forgot their inconsistencies of this season to run in eight tries, answered only by a second-half touchdown by Romain Martial.

Despite the enormous win, Stade only rose to eighth, while Racing 92 were also on the up after a 23-23 draw with La Rochelle, secured by Dan Carter converting Yannick Nyanga's last-minute try.

Castres also cemented their top-six spot with a 23-19 victory at Lyon.