Stone hits the front as Hanson and Coetzee also surge 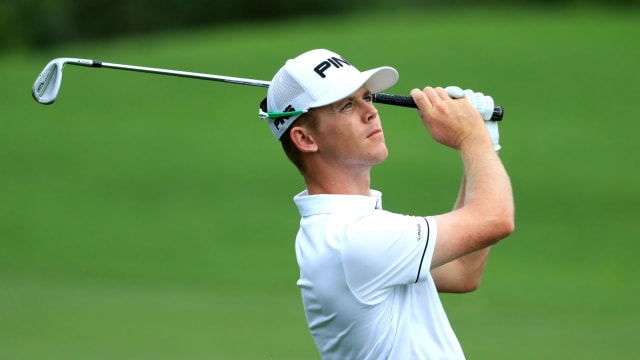 Brandon Stone surged to the top of the leaderboard with an eagle at the last as Chris Hanson and George Coetzee also made big moves on round two of the Alfred Dunhill Championship on Friday.

Stone was two under for his round at the turn as three birdies were slightly negated by a bogey at the fourth.

He picked up two more strokes before handing one back at the 13th, but finished strongly with a birdie at 15 before his last-hole heroics took him clear at the summit.

.@BrandonMStone with an eagle putt on 18 to take the lead....#DunhillChampshttps://t.co/fkpO4PAX0a

Defending champion Schwartzel, who started his round on the back nine, was six under for his round, which included lengthy putts at the fourth and fifth holes, but a double bogey at the seventh - his 16th - thwarted his progress.

2 holes, 90 feet worth of putts made.@CA_Schwartzel loves these greens. https://t.co/4YKUPTYyVp

Englishman Hanson recorded the joint-low score of the day with a seven-under 65.

His brilliant card showed eight birdies, with his only blemish coming with a bogey at the par-five 15th.

Closing birdie gives @Hansonprogolf a second round 65 and he lies just one off the pace heading into weekend #dunhillchampspic.twitter.com/svkC3jro3e

Hanson's efforts were matched by Coetzee, who is two shots off the pace on nine under.

Coetzee, who like Schwartzel started on the back nine, saw two early birdies wiped out with a double bogey, but he responded in style by birdieing six of the next seven holes and gained another stroke at the last.

First sub-30 nine holes of 2017 Race to Dubai goes to @gcoetzeegolf with a 29 on front 9 at Leopard Creek. Just one off lead #dunhillchampspic.twitter.com/IDQLcff9LR

Keith Horne is tied with Coetzee in fourth thanks to a 66, while Branden Grace is among a cluster of players on eight below par.

Paul Dunne, who was tied with Schwartzel after round one, was unable to match Thursday's exploits as a one-over 73 left him in a tie for 19th.