Rowe up and running at Florida as Halak and Tarasenko shine 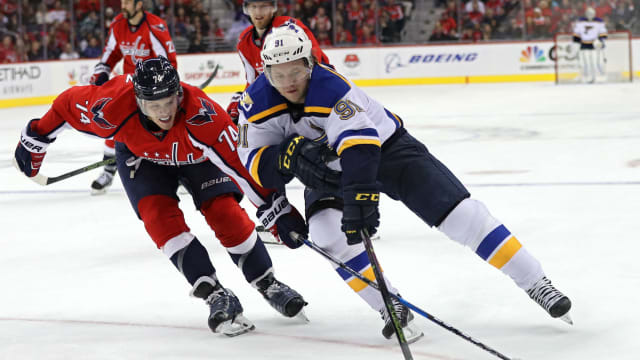 The Panthers are now 5-0 in overtime this season, with the Red Wings 1-3 and the hosts were left to rue Panthers goalie Roberto Luongo thwarting Henrik Zetterberg before Jonathan Marchessault's long pass sent Barkov clear to score for the first time in 21 games and secure the points.

Detroit led through Zetterberg before Jason Demers levelled matters before the end of the first period.

Washington Capitals were frustrated by 38 saves from Jaroslav Halak before third-period goals from Shane Prince, Brock Nelson and Jason Chimera compounded their misery and gave the visiting Islanders a 3-0 win.

A pair of third-period goals from Jack Eichel on his home return from injury gave Buffalo Sabres a 4-3 win over New York Rangers at the KeyBank Center.

An early Johan Larsson effort put the Sabres ahead but Ryan McDonagh tied things up before the end of the first, and Rick Nash made it 2-1 to the Rangers.

Sabres captain Brian Gionta equalised for his team but New York hit the front through Marc Staal's second of the campaign, only for Eichel to decisively intervene.

Kevin Shattenkirk also chipped in with two goals to sit alongside two assists - the second four-point  game of his career.

ON THE ROWE TO SUCCESS

Rowe's maiden triumph with the Panthers came as Luongo made 20 saves to 28 from Detroit's Petr Mrazek.

Barkov's third goal of the season concluded a barren run. "I don't even remember my last goal, so it was good to see one go in," he told NHL.com. "That made the win feel even better."

Following the majority of Halak's brick-wall act, Prince, Nelson and Chimera scored all of the Islanders' goals in the space of four minutes and 28 seconds.

On the back of a 5-3 win over Pittsburgh Penguins on Wednesday, the Islanders are on a three-game streak and their season record stands at 9-10-4.

The Capitals had a power-play goal chalked off in the final throes of the first period, with a video review ruling Justin Williams' shot did not cross the line before the buzzer.

Eichel's sterling performance came after a goal and an assist on his return from an ankle injury in Buffalo's 5-4 win over Ottawa Senators on Tuesday. He has points in seven straight games dating back to last season.

The Rangers have lost two of their past three games and stand on 16-8-1 for the season, with the Sabres improving to 9-9-5.

New York 's defeat was the first time they have ended up on the wrong end of the score when leading after two periods this season.

Tampa Bay were on target through a pair of Cedric Paquette goals, Tyler Johnson and Nikita Kucherov, but have now lost four in a row and five out of their last six.

The visitors could not find an equaliser despite outshooting St Louis 12-6 in the third.

Shattenkirk was fulsome in his praise of Tarasenko. "He's the best player I've ever played with, hands down," he told NHL.com. The Blues' matchwinner has nine goals and eight assists in his past 13 games.

Behind the goal? No problem for Pittsburgh's Sidney Crosby

Boston Bruins required a shootout to see off Carolina Hurricanes, while there were overtime wins for Chicago Blackhawks and Philadelphia Flyers against New Jersey Devils and the Senators respectively.

Edmonton Oilers and the Penguins hit Winnipeg Jets and Dallas Stars for six, while there were also wins for Columbus Blue Jackets over Colorado Avalanche, Los Angeles Kings against Arizona Coyotes and Anaheim Ducks versus Vancouver Canucks.

Chicago lead the Western Conference's Central Division and will aim to make it three wins in a row over Philadelphia on Friday, with both teams bolstered by overtime joy.