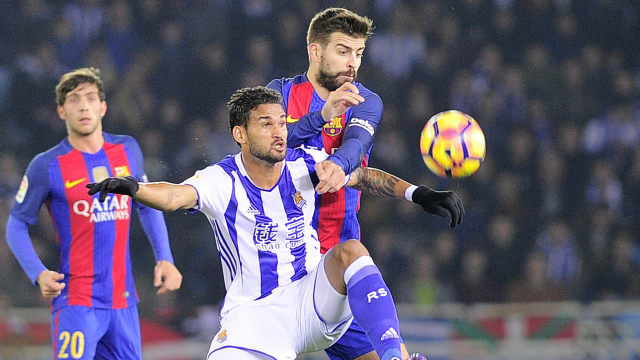 Gerard Pique said Barcelona cannot hope to defend their title if they repeat the performance they produced against Real Sociedad on Sunday.

The champions were held to a 1-1 draw that extends their nine-year winless run at Anoeta and leaves them six points behind LaLiga leaders Real Madrid ahead of next week's Clasico.

Lionel Messi snatched an equaliser shortly after Willian Jose had put the home side ahead, but Barca were second best throughout the contest and were fortunate not to lose, with Juanmi seeing a goal unjustly ruled out for offside while Carlos Vela twice hit the woodwork.

And Pique questioned the quality and mentality of his side after the match, telling Movistar Plus: "We were beaten in performance and attitude.

"In the first half, we vanished. It will be very difficult to win LaLiga like this.

"They pressed us well and prevented us from playing our game. You can hardly say that was Barca, but a draw from today isn't too bad."

Pique, who picked up a knock to his ankle during the first half, hopes to be fit for the visit of the league leaders to Camp Nou next Saturday - a team he acknowledges as the best in the top flight at present.

"I think I'm okay. My ankle hurt in the first half but I hope to be there on Saturday," said the centre-back.

"It's a very important match and I know that the fans will respond. We play against a great team, the best in the league right now - that's why they are where they are."

Vela admitted that Sociedad were frustrated not to earn a win that would have taken them above Atletico Madrid and into the top four.

"I'm a little disappointed," said the former Arsenal man. "With the chances we had, we deserved more than a point. But that's football. We can come out with our heads held high.

"With the ball, they're the best team in the world, so we had to make sure they worked a little less. I think we had a great game, it's just a pity we didn't get the win.

"These games are always really nice games and we don't usually lose. We haven't set ourselves a goal, we just wanted to give a good account of ourselves today."