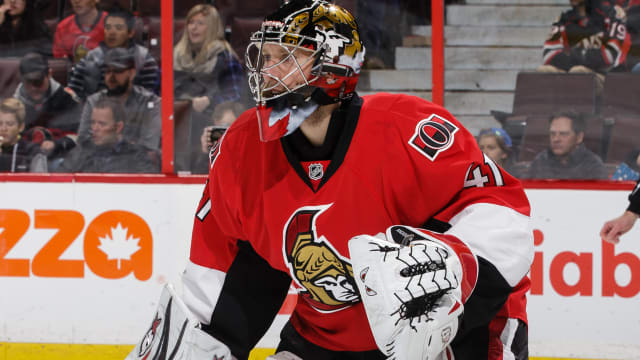 The Ottawa Senators shut out the New York Rangers in the NHL as the Boston Bruins and Winnipeg Jets snapped their losing streaks.

Craig Anderson made 33 saves as the Senators held out the Rangers for a 2-0 win on Sunday.

Losing streaks for the Bruins and Jets finally came to an end.

The Bruins' three-game losing run is over after their win against the Tampa Bay Lightning, while the Jets stopped their slump by beating the Nashville Predators.

Anderson had his third shutout of the season during the win over the Rangers.

Both goals came in the second period as Jean-Gabriel Pageau and Mark Stone scored at Madison Square Garden.

Bruins goaltender Tuukka Rask was denied a shutout, but he still led Boston to a 4-1 win over the Lightning.

The goalie made 30 saves and the Bruins set up their win with a three-goal second period.

The Jets ended their five-game losing streak with a 3-0 win over the Predators.

Connor Hellebuyck made 42 saves, while Drew Stafford, Mark Scheifele and Adam Lowry scored for the Jets.

Heads up, the Wayne Train is coming in full steam. pic.twitter.com/ABw25ROtCS

The Carolina Hurricanes came from two goals down to beat the Florida Panthers 3-2, the Arizona Coyotes edged the Edmonton Oilers 2-1 and the Philadelphia Flyers recorded a 5-3 win over the Calgary Flames.