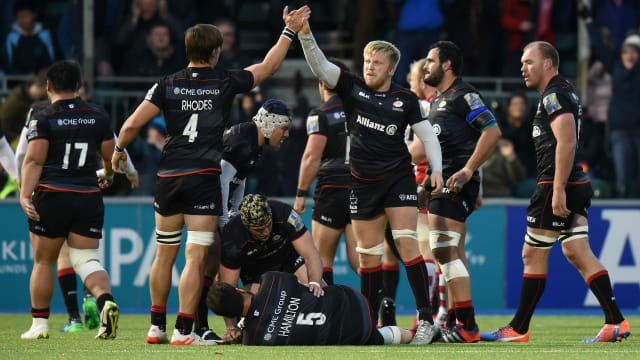 Saracens strengthened their position at the top of the Premiership with a hard-fought victory over Gloucester and could be boosted by the return of England lock Maro Itoje next weekend.

Three second-half penalties from Alex Lozowski earned Mark McCall's team a 24-20 win on Sunday against a Gloucester side who opened the scoring inside a minute and led by two points at the interval.

After seeing Sarries claim an eighth success from nine league matches this term, director of rugby McCall revealed Itoje is close to returning from the hand injury that ruled him out of England's end-of-year internationals.

"He hasn't played any rugby since starting his rehab or had any involvement in contact at all. But, if the surgeon gives him the all-clear, hopefully he can have some sort of involvement next weekend."

All four tries in Sunday's game at Allianz Park came inside the first quarter, Ben Morgan and Billy Burns' respective efforts for Gloucester swiftly cancelled out by Brad Barritt and Mike Ellery.

Lozowski then split the posts on three occasions after the interval to ensure Saracens prevailed.

Wasps moved up to second with a 34-24 victory over Sale Sharks at the Ricoh Arena, Ashley Johnson and Rob Miller each claiming two tries for the hosts as Bryn Evans' brace proved in vain.

Victory for Wasps saw them leapfrog Bath, who were edged out 21-20 by Harlequins courtesy of Tim Swiel's 74th-minute penalty.