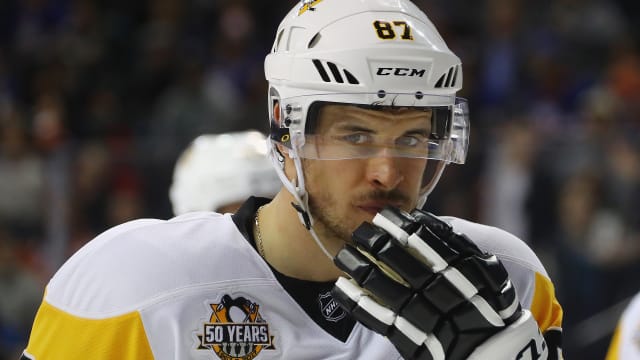 The Pittsburgh Penguins and Montreal Canadiens needed late goals to claim wins in the NHL on Saturday.

Sidney Crosby scored with 14 seconds remaining before the Penguins had a 4-3 shoot-out win over the New Jersey Devils.

The Canadiens needed overtime, battling to a 2-1 victory over the Detroit Red Wings.

The Penguins held a second-period lead as Jake Guentzel and Tom Kuhnhackl scored after Michael Cammalleri's opener for the Devils.

However, Cammalleri scored again to go with a Vernon Fiddler effort to put the Devils ahead.

But Crosby tied the game in the final minute before Kris Letang scored the only goal in the shoot-out.

The Canadiens also had to come from behind.

Justin Abdelkader gave the Red Wings a lead before Brendan Gallagher tied the game and Alex Galchenyuk was the OT hero.

The Kings made it five straight wins by overcoming the Blackhawks 2-1.

Probably don't want to leave Crosby alone with 14 seconds on the clock. pic.twitter.com/0dykiKZy5g

Just fast forward to the part where @CP0031 stops all the pucks. pic.twitter.com/j7EYDEBjIJ

Elsewhere, plenty of shoot-outs were needed.

The Florida Panthers (2-1 over the Columbus Blue Jackets), St Louis Blues (4-3 over the Minnesota Wild) and Vancouver Canucks (3-2 over the Colorado Avalanche) all needed shoot-outs.

The Ottawa Senators edged past the Carolina Hurricanes 2-1, the Anaheim Ducks beat the San Jose Sharks 3-2 and the Toronto Maple Leafs had a 4-2 win over the Washington Capitals.