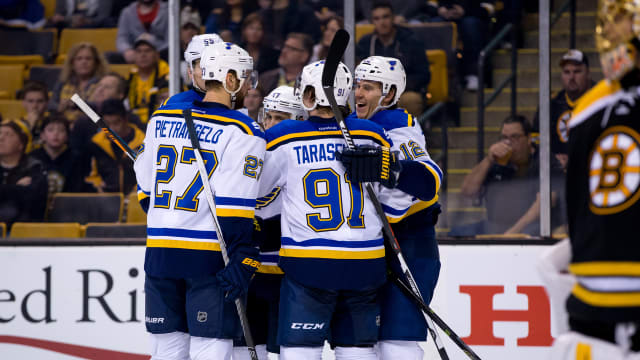 The St Louis Blues extended their winning run in the NHL as the Montreal Canadiens' scratchy recent form continued.

The Blues made it four straight wins courtesy of a 4-2 victory over the Boston Bruins on Tuesday.

The Canadiens have lost four of their past five after going down to the Ottawa Senators 4-3.

Meanwhile, Steve Mason led the way for the Philadelphia Flyers in their win.

The Blues fell behind to a David Backes goal, but a three-goal second period would put them in control against the Bruins.

Jake Allen made 39 saves for the Blues at TD Garden.

The Canadiens led three times before going down to the Senators.

Shea Weber, Alexander Radulov and Alex Galchenyuk gave the Canadiens the lead, only for their goals to be cancelled out by Mike Hoffman, Derick Brassard and Mark Stone respectively.

Erik Karlsson then scored what proved to be the match-winner after five minutes, 37 seconds in the third period.

Josh Bailey wasn't going to miss from there. #NYIvsANApic.twitter.com/iujORGdH6k

Mason made 38 saves to see the Flyers to a 3-1 victory over the Florida Panthers.

The Carolina Hurricanes edged past the Toronto Maple Leafs 2-1 and the New York Islanders had a 3-2 shoot-out win over the Anaheim Ducks.