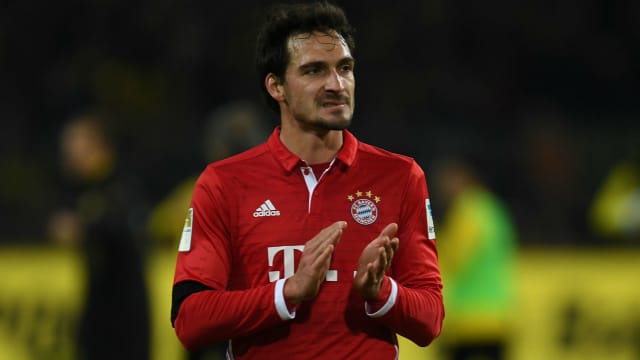 Lothar Matthaus feels it was inappropriate for Mats Hummels to visit his former team-mates in the Borussia Dortmund dressing room before Bayern Munich's Klassiker loss on Saturday.

Reigning Bundesliga champions Bayern went down 1-0 to Pierre-Emerick Aubameyang's goal in the 11th minute of the crunch match at Signal Iduna Park.

Hummels, who moved somewhat acrimoniously from Dortmund to the Allianz Arena in the off-season, paid a visit to Thomas Tuchel's squad ahead of the clash.

And former Germany international Matthaus, a passionate character during his decorated playing career with Borussia Monchengladbach, Bayern and Inter, feels Hummels was unwise to fraternise ahead of a crucial game.

"I would not forbid Mats Hummels if I was the present coach, but would suggest that [takes place] after the game," he told Sky.

"Before the game, the concentration should be on the game and not the old friendships."

Having won four titles in succession under Jupp Heynckes and then Pep Guardiola, Bayern are struggling for consistency with Carlo Ancelotti at the helm.

"FC Bayern is looking for its form," Matthaus said. "[They] lack fitness, joy and self-assurance.

"Many things that made them strong last year are missing here."

For his part, Hummels felt the outcome could have been different had Bayern made more of their opportunities.

He said: "We did not score the goal at the end of the day, in a game that we could have gone differently, with a better, more effective use of our chances, either through a shot or the last pass.

"That's not the case in the highlights, but it's a great opportunity in theory."