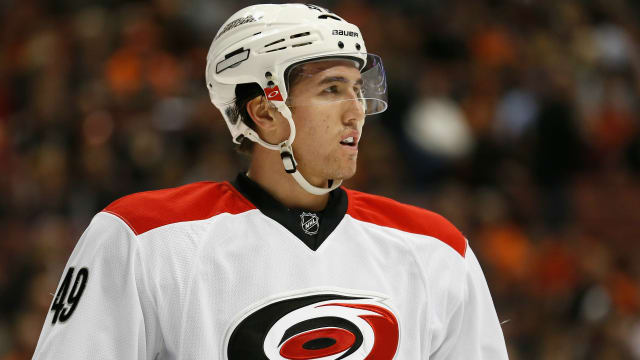 Victor Rask and Noah Hanifin scored power-play goals to see the Hurricanes to a 3-1 win against the Winnipeg Jets - their fourth successive victory.

A late winner from Alexander Wennberg lifted the Blue Jackets past the Washington Capitals 3-2.

It was Columbus' fourth win in succession.

The Detroit Red Wings slumped to a fourth consecutive defeat, beaten by the Calgary Flames.

Carolina (7-6-4) were in control early against the Jets, Elias Lindholm giving the Hurricanes a 1-0 lead seven minutes into the opening period.

Rask doubled the lead in the third period, when he was set up by Lee Stempniak.

Mark Scheifele reduced the deficit seven minutes later for Winnipeg (9-10-2) before Hanifin made it 3-1 with less than two minutes remaining.

Wennberg scored on a power play to extend his team's winning streak.

Washington (11-5-2) saw their two-game unbeaten run come to an end.

The Red Wings crashed to a fourth consecutive defeat after losing 3-2 to the Flames.

Mikael Backlund broke the deadlock for the Flames (8-11-1) with less than eight minutes remaining.

Not sure how he found a hole there, but Mantha roofs a beauty. #CGYvsDETpic.twitter.com/dkWcjAchV5

Shoot-out goals from Aleksander Barkov and Vincent Trocheck helped the Florida Panthers to a 3-2 win over the New York Rangers.

The Los Angeles Kings downed the Anaheim Ducks by the same scoreline.

After losing a shoot-out on Saturday, reigning champions the Pittsburgh Penguins host the Rangers on Monday. In some of the other games, the Tampa Bay Lightning face the Nashville Predators and the Chicago Blackhawks meet the Edmonton Oilers.