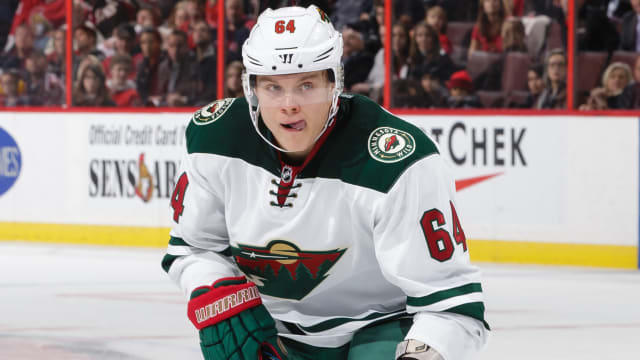 The Minnesota Wild left it late to edge the Boston Bruins in the NHL, while Ben Bishop helped the Tampa Bay Lightning to their third straight win.

Mikael Granlund scored a late goal as the Wild overcame the Bruins 1-0 on Thursday.

The Lightning were far more comfortable, easing to a 4-1 victory over the Buffalo Sabres.

Meanwhile, Connor Brown was the star in a Toronto Maple Leafs win.

It took until the final minute for the deadlock to be broken in Minnesota.

Granlund scored with 44.5 seconds remaining to see the Wild edge past the Bruins.

Bishop made 32 saves for Tampa Bay, while Alex Killorn finished with a goal and an assist.

Nikita Kucherov scored his ninth goal of the season in the win.

It marked a sixth straight loss for the struggling Sabres.

Brown had two goals and two assists for the Maple Leafs in a 6-1 thrashing of the Florida Panthers.

Nazem Kadri finished with two assists in the huge win.

The Philadelphia Flyers and Nashville Predators were free-scoring in wins over the Winnipeg Jets (5-2) and Ottawa Senators (5-1) respectively.

The St Louis Blues edged the San Jose Sharks 3-2, the Dallas Stars overcame the Colorado Avalanche 3-2 and the Anaheim Ducks beat the New Jersey Devils by the same score.

The Vancouver Canucks needed overtime to beat the Arizona Coyotes 3-2 and the Los Angeles Kings claimed a 4-2 win over the Edmonton Oilers.