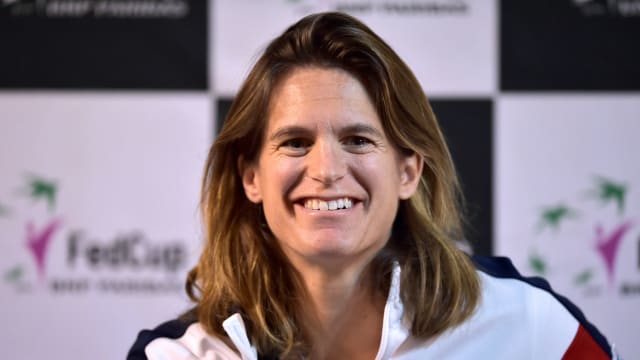 Amelie Mauresmo will leave her role as captain of France's Fed Cup team following the news she is pregnant with her second child.

Mauresmo's team were beaten 3-2 in the final by Czech Republic over the weekend, having led 2-1.

Widespread reports on Monday claimed the 37-year-old would step down from her role, and she confirmed the news in a media conference.

"I'm going to give birth in April 2017, and this is incompatible with the timing of the Fed Cup," Mauresmo said.

"The first round is in February and the possible semi-final in April. I announced to the girls this morning. They were not aware because I wanted them to be concentrated 100 per cent on the final.

"There was obviously a lot of emotions, especially since we did not sleep much [after Sunday]."

The Fed Cup's official Twitter account and members of France's beaten side passed on their thanks and congratulations to Mauresmo, herself a Fed Cup winner in 2003.

It's au revoir and félicitations to @AmeMauresmo who steps down as France's #FedCup captain with her second child on the way! pic.twitter.com/K1MTxo7516

"Cap @AmeMauresmo, THANK you for everything that you brought these last 4 years we have grown up beside you. We'll miss you!" posted Alize Cornet on Twitter.

"Captain, thanks for what you have brought these 4 years. Thank you for this wonderful adventure and all these moments shared with you on the court and outside, in good times as in bad! I will miss you," added Kristina Mladenovic on Instagram.