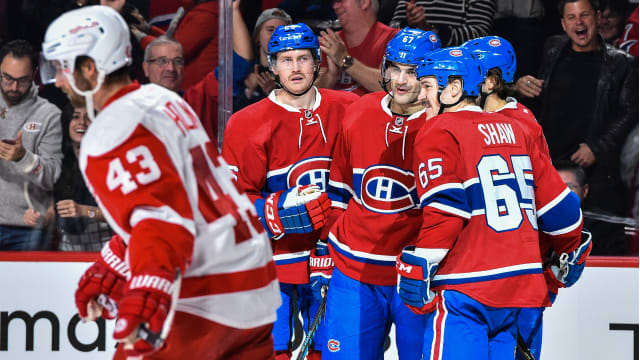 The Montreal Canadiens posted their 10th consecutive home win by shutting out the Detroit Red Wings, while reigning NHL Stanley Cup champions the Pittsburgh Penguins were too strong for the Toronto Maple Leafs.

Saturday saw the in-form Canadiens blank the Red Wings 5-0 to preserve their 100 per cent record on home ice this season.

The Canadiens have won four games in a row and seven of their past eight.

Pittsburgh rallied to beat the Leafs 4-1 as they bounced back from defeat on Thursday.

Among the winners elsewhere were the San Jose Sharks, the Columbus Blue Jackets and the Nashville Predators.

The Canadiens are enjoying their best home start to the season.

Carey Price made 25 saves for his 38th shutout as the Canadiens bettered the 1953-54 team's record of nine successive home wins to open a campaign.

Penguins captain Sidney Crosby had 10 goals in nine games this season after scoring in Pittsburgh's win at home to the Maple Leafs.

Crosby made it 4-1 in the third period to seal the comeback after the Leafs had taken a 1-0 lead 1:22 into the game.

MORE HISTORY FOR PRICE AND CANADIENS

Absolutely incredible. @CP0031 is now the first goalie in NHL history to win each of his first 10 games of a season. And it was a shutout. pic.twitter.com/NY1d1XO33o

The Blue Jackets and their offence carved up the St Louis Blues as they cruised to an 8-4 victory.

Columbus, who opened the scoring, raced out to a 7-1 lead before the Blues salvaged a little bit pride on the scoreboard.

A two-goal opening period helped the Sharks to a 3-1 win over the Tampa Bay Lightning - their third in a row.

The Predators crushed the Anaheim Ducks 5-0 for a third consecutive victory.

The Florida Panthers prevailed 3-2 over the New York Islanders in overtime, the Philadelphia Flyers beat the Minnesota Wild by the same scoreline, the Carolina Hurricanes defeated the Washington Capitals 5-1, the Boston Bruins edged the Arizona Coyotes 2-1, the New Jersey Devils were 4-2 winners over the Buffalo Sabres, while the New York Rangers trumped the Calgary Flames 4-1.

The streaking Canadiens are away to the Chicago Blackhawks (10-3-2) on Sunday. The Rangers and the Edmonton Oilers will also go head-to-head on a day feature six games in total.