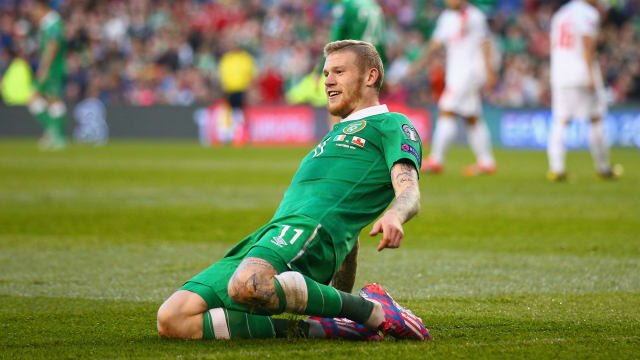 James McClean was delighted to have scored the winner as the Republic of Ireland triumphed 1-0 in Austria on Saturday - but even more pleased that his goal prevented a rollicking from Roy Keane.

West Brom winger McClean capped a wonderful sweeping move three minutes into the second half with a low drive that flashed through the legs of home goalkeeper Ramazan Ozcan.

His strike moved Ireland three points clear at the top of World Cup qualifying Group D, although Serbia can draw level with victory at Euro 2016 semi-finalists Wales later on Saturday.

And although he was quick to recognise the significance of the goal, McClean had an extra reason to smile afterwards.

He told Sky Sports: "If I'd have missed [Ireland assistant manager] Roy Keane would have killed me!

"He always tells us in training to hit the target, he drums that into us. I hit it sweetly and it flew through the keeper's legs."

It was Ireland's first win against Austria in 53 years and puts them in a strong position to claim a place in Russia in two years' time.

McClean added: "It's huge. If you look at the group, there are no world-class teams in there but four very good teams and that sometimes makes it harder.

"We had to get points off the teams around us so to come here and win is massive.

"Hopefully that gives us the platform to push on in the group.

"But they are all hard teams. It's Wales next and that won't be easy but we have momentum and are top of the group so were delighted."