Kompany and Dembele ruled out for Belgium 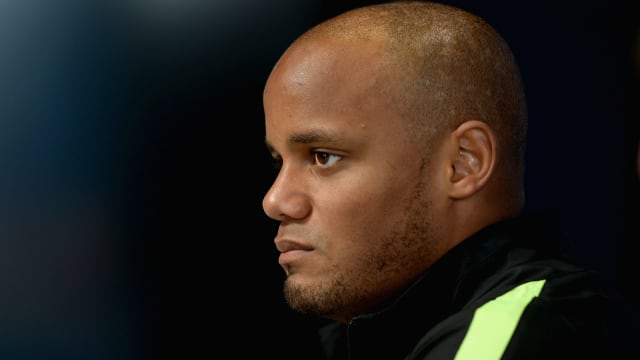 Vincent Kompany will sit out Belgium's home game with Estonia on Sunday due to a groin problem.

The Manchester City captain was a late omission from the starting XI to face the Netherlands on Wednesday with Red Devils head coach Roberto Martinez claiming at the time it was purely a precautionary measure.

It has now emerged, however, that Kompany is suffering with an injury and he, along with Tottenham midfielder Mousa Dembele, will miss the World Cup qualifier in Brussels over the weekend.

Martinez told a news conference: "Vincent has a discomfort in his groin area. He hasn't been training and just been recovering.

"He has reacted well but at this point I am not going to take Vincent into consideration for the game on Sunday.

"Vincent is very eager, but we must work with his club to get him fit."

Kompany has been dogged by persistent muscular injuries over recent seasons, most notably groin and calf, but he was set to appear for Belgium for the first time in almost 13 months at the Amsterdam Arena.

But he was not part of the visiting side to take to the field, with debutant Christian Kabasele featuring in his place for a game where Yannick Carrasco's deflected 82nd-minute strike cancelled out a first-half penalty from Netherlands' Davy Klaassen.

"There is no injury to Vincent Kompany," Martinez told reporters afterwards.

"We did not want to take any risks with him and Kompany did not feel well after the warm-up.

The situation echoed Kompany's removal at half-time during City's 1-0 EFL Cup loss to rivals Manchester United at Old Trafford, with manager Pep Guardiola confirming afterwards that the 30-year-old "told me he could not play anymore".

He was an unused substitute for the next three matches under Guardiola, who has urged Kompany to maintain an honest dialogue with City's medical staff in order to try and rebuild his fragile fitness.