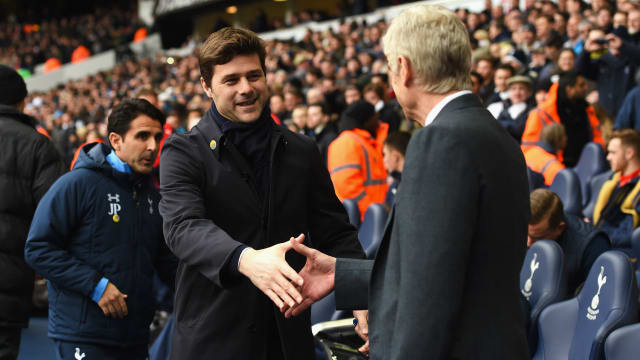 Tottenham manager Mauricio Pochettino says there is no point comparing his club with Arsenal, given the decades of stability enjoyed by Arsene Wenger.

The Gunners host Spurs in the north London derby on Saturday a month after Wenger celebrated his 20th anniversary in charge of the club.

Pochettino has transformed expectations at White Hart Lane since his appointment in 2014, having inspired them to an unlikely Premier League title challenge last term, while they remain the only unbeaten side in the top flight in 2016-17.

But the former Argentina defender says that the ongoing work to rebuild both Spurs' stadium and the squad itself means trying to draw comparisons with their fierce rivals is futile.

"Arsenal, after 20 years of Arsene Wenger, are one of the most consistent clubs in the world. It's difficult to compare us with Arsenal," he said.

"We want to be one of the best but we're still building the training ground, the new stadium and our squad. But you put that away when you compete. We need to be aggressive and try to play better than them."

Spurs' 1-0 Champions League defeat to Bayer Leverkusen at Wembley on Wednesday means they are without a win in six games in all competitions since beating Manchester City 2-0.

"We're not in a positive situation, we've struggled to win games after beating Manchester City," Pochettino said. "We need to work hard and try more than before because we're in a difficult moment.

"You need to be ready to change the dynamic and we have a very good opportunity on Sunday.

"It will be an exciting game for us and for them, too. It will be tough for both teams. It's a big challenge for them to beat us and for us to win.

Harry Kane is back from an ankle injury and in contention to start, but Pochettino expects to be without defender Toby Alderweireld and potentially midfielder Mousa Dembele.

"Toby is struggling a little bit in his recovery but he should be available after the international break. He's very close but it's a very slow recovery," he said.

"I can only say [Dembele] is a doubt, we'll assess him tomorrow and then decide. It's not a big deal but it's painful on his ankle."