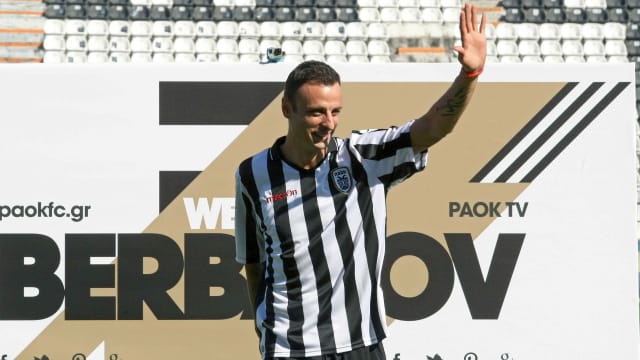 Swansea City manager Bob Bradley is monitoring Dimitar Berbatov with a view to bringing the veteran striker back to the Premier League.

Berbatov has been a free agent since his contract with PAOK expired at the end of last season.

The former Bulgaria international last played in the Premier League with Fulham in 2014, following distinguished spells at Tottenham and Manchester United.

The 35-year-old said earlier this week that he would relish a return and Bradley, appointed at Swansea at the start of last month following the sacking of Francesco Guidolin, says bringing Berbatov to the Liberty Stadium is a possibility.

"I actually saw him in May at the celebration game for [Hristo] Stoichkov in Sofia," he said.

"I've met him a few times and know he's anxious to get back in the Premier League. Everybody in our club knows that, so when there's discussions his name is mentioned, but where it goes we'll see.

Since Bradley's arrival, Swansea have taken one point from their three Premier League outings, a sequence the American hopes to improve upon when Manchester United visit on Sunday.

In Thursday's pre-match media conference, Bradley said Swansea's inability to deal with key moments in games is costing them dear.

"In a match, situations develop quickly, and you need the ability to recognise those situations, to smell danger and react quickly," he said.

"For me, that's the area where I think we are missing the most. That's what I mean when I talk about players lacking confidence.

"In a game you can appear for long stretches to be doing a solid enough job, but you cannot have four, five or six plays where the ball pops loose, the opponent does something a bit different from what you expect and they make something out of it.

"We don't deal with those situations well enough. I have seen examples of that before I came in and I still see them.

"People have made an effort to get back into the game, but in terms of asserting ourselves at the right moment, we have to improve."