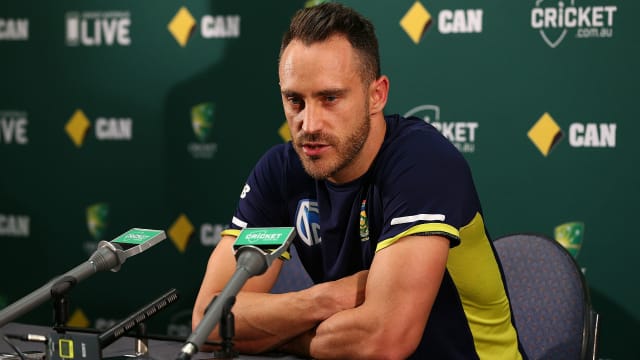 Faf du Plessis will lead out South Africa at the WACA on Thursday having sought the advice of the only Proteas captain to win a Test series in Australia.

On the eve of the first Test against Australia in Perth, Du Plessis revealed he would speak to Graeme Smith, who skippered South Africa in a record 109 five-day matches.

However, Du Plessis also made it clear he views the upcoming three-Test series as the start of a "new journey" for his team, as they seek to take steps towards regaining the number-one ranking they previously held.

"We don't want to be that team of the past, we have our own goals that we want to achieve," said the 32-year-old middle-order batsman.

"I think that was one of the most important things we needed to change as a team. For a year we were playing in the shadow of the team that used to be number one and with a lot of personalities missing it was difficult to do that."

On his discussion with Smith, Du Plessis added: "I'm supposed to speak to Graeme a bit later, just to try to get some ideas of how he did things when he was over here because he was a very successful captain. I'm looking forward to that conversation.

"The most important thing for me as a leader is to put your ego aside and try and ask and learn as much as you can because there's a lot of valuable information out there.

"I'm extremely grateful that I have been put in a situation where I have been given the Test team when I am slightly older, a bit more mature and understand myself as a leader a bit better."

The meeting between Australia and South Africa in Perth will be followed by further Tests in Hobart and Adelaide later this month.