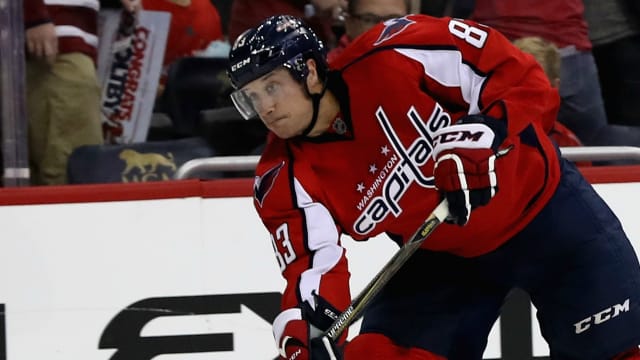 A late Jay Beagle goal saw the Washington Capitals past the Winnipeg Jets, while the New York Rangers blanked the St Louis Blues in a big NHL win.

Beagle scored with 30 seconds remaining to give the Capitals a 3-2 win over the Jets on Tuesday.

The Rangers showed no mercy against the Blues, posting a comprehensive 5-0 shot-out victory.

There were respective 3-2 overtime wins for the Toronto Maple Leafs and the Columbus Blue Jackets, who outlasted the Edmonton Oilers and the Dallas Stars.

Artem Anisimov cannot be stopped at the moment.

Anisimov had a goal and an assist as the Chicago Blackhawks crushed the Calgary Flames 5-1.

He is in the midst of a career-high eight-game point streak.

The Rangers had five different goalscorers in their shutout of the Blues.

Dan Girardi, Jimmy Vesey, Rick Nash, Mats Zuccarello and Kevin Hayes were all on target for the Rangers.

A quick stick has @LawCrouse on the board. Congrats on goal #1! #NHLFirstspic.twitter.com/E3OyqVlbKA

The Tampa Bay Lightning and the Nashville Predators put their opponents to the sword on Tuesday.

The Lightning humbled the New York Islanders 6-1, while the Predators accounted for the Colorado Avalanche 5-1.

Elsewhere, the Boston Bruins edged the Florida Panthers 2-1, the Minnesota Wild beat the Buffalo Sabres by the same scoreline, the San Jose Sharks lost 3-2 to the Arizona Coyotes, while the Anaheim Ducks eased past the Los Angeles Kings 4-0.

SEVEN IN A ROW?

The streaking Montreal Canadiens can extend their winning run to seven matches with victory over the Vancouver Canucks on Wednesday. Also in action are the Pittsburgh Penguins and Detroit Red Wings.