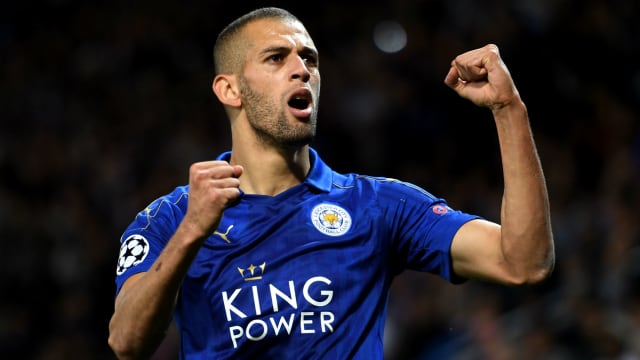 Claudio Ranieri has ruled Islam Slimani out of Leicester City's Champions League clash with FC Copenhagen - but Ahmed Musa is fit to feature on Wednesday.

Striker Slimani, who has scored three goals since his arrival from Sporting Lisbon at the end of August, sat out the 1-1 Premier League draw with Tottenham on Saturday due to a slight groin strain.

While he trained with the rest of the squad at the Parken Stadium on Tuesday, Ranieri will not put the Algeria international's long-term fitness in jeopardy just for one game.

However, having limped off after scoring the equaliser at White Hart Lane, fellow forward Musa is available for a fixture that could see Leicester qualify for the knockout stages.

"I think [Islam] Slimani is not ready and [Ahmed] Musa is ready," Ranieri told the club's official website.

"I don't want to risk him. The physio told me he's okay but be careful, but why play a player for one match and then lose him for a month?"

The Premier League champions know a win secures them a place in the last 16 of the competition, although even a draw will be enough if Group G rivals Porto fail to beat Club Brugge.

Ranieri said: "We are very close to achieving something special for us.

"Everything is in our hands and we can write a new chapter in the Leicester story. It's important to concentrate because Copenhagen are well organised. I respect them a lot."

While playing in Europe has put an extra strain on his squad, Ranieri is yet to decide if he will shuffle his pack against the Danish champions.

"Everybody recovered very well. When you play in the Champions League, the mental energy is very high. We will find the right solution," he added.