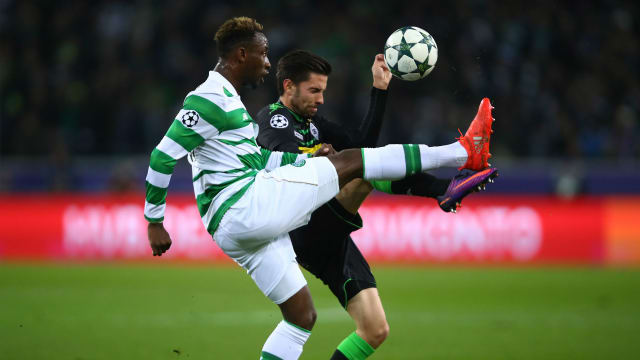 The Scottish champions were on the brink of being dumped out of the competition after Lars Stindl's first-half goal looked to be enough to send the travelling Celtic supporters home disappointed, but Julian Korb was sent off when he felled Dembele in the box 15 minutes from time.

Dembele made no mistake in scoring his fifth Champions League goal of the season to help his side salvage a point that gives them a slim but precious hope of progressing in the competition.

To do so they will have to take points from their remaining games against Manchester City and Barcelona and it might yet be that third place in Group C - and a place in the Europa League - will be the best they can realistically achieve.

Gladbach, meanwhile, will regret failing to attack Celtic with the flair and verve on display in Glasgow two weeks earlier when they ran out 2-0 winners.

The hosts made a confident start, and Celtic struggled to get out of their own half while Thorgan Hazard orchestrated a string of early chances for the Foals.

Just as Scott Brown and Stuart Armstrong started to show what Celtic can do with the ball, Gladbach broke quickly out of defence and only a good save from Craig Gordon prevented Tobias Strobl from making it 1-0.

Having weathered the early pressure, Celtic went within a whisker of the lead when Cristian Gamboa's cross found Scott Sinclair, who curled an elegant shot onto the inside of the post - only to see it bounce clear of Yann Sommer's goal.

Gladbach have struggled to score in the Bundesliga recently, but they looked every bit the clinical attacking outfit when Christoph Kramer's pass fed Hazard, whose cross was met with a perfectly timed Stindl volley that gave Gordon no chance.

Moussa Dembele forged a chance to equalise before half time, but Armstrong blasted his shot well over the crossbar to leave Celtic trailing at the break.

Stindl fluffed his lines when put clean through by Stobl early in the second half and Fabian Johnson put a great chance wide when a Scott Brown error allowed Gladbach a clear run in on goal.

Andre Hahn rattled the post after Gladbach pounced on an Armstrong error and put together a fluent attacking move, the hosts looking on course for three points.

Dembele had other ideas as he gave Sommer his first real test of the season with a powerful shot that the goalkeeper did well to parry away.

And the game turned after 75 minutes, when Korb dragged the striker to the floor as the Celtic striker advanced on goal.

He duly converted from the spot to rescue the point, and keep Celtic's hopes alive with two games to play.

The equaliser and the man advantage came too late for Celtic to snatch a dramatic victory, though, with substitute Callum McGregor missing a golden opportunity to make it 2-1 at the death.