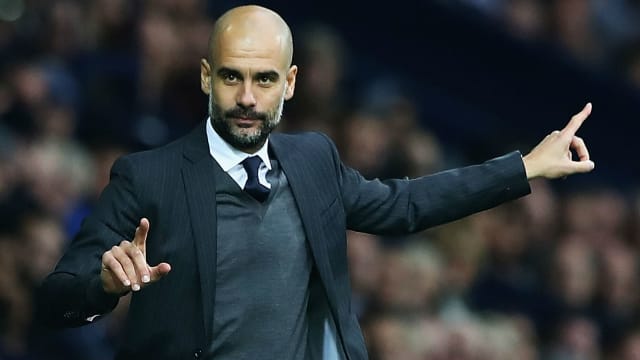 Pep Guardiola has urged Manchester City to learn the lessons of their red card woes against Barcelona when LaLiga's champions make their latest visit to the Etihad Stadium on Tuesday.

City trail Barca by five points in Champions League Group C after going down to a 4-0 defeat at Camp Nou two weeks ago, where an initially encouraging display unravelled rapidly after goalkeeper Claudio Bravo was sent off for deliberate handball.

It was the fourth time in five defeats to Barcelona over the past four seasons that City have ended with reduced numbers against the Catalan giants, with Bravo's moment of madness versus his former employers seeing him gain unwanted membership to a dubious club alongside Martin Demichelis, Pablo Zabaleta and Gael Clichy.

Willy Caballero will seek to repel Barcelona's formidable forward line in Bravo's absence after Lionel Messi completed a hat-trick at the expense of his fellow Argentinian in the previous encounter.

"When I am talking about how you have to learn it is these type of things. It is always difficult to win the Champions League games," said Guardiola, whose City team won for the first time in seven matches at West Brom on Saturday.

"It is always difficult to win against Barcelona, 11 v 11. Ten against 11 is almost impossible. Manuel [Pellegrini, the former City manager] lived that.

"It's football and football is a game of mistakes. Sometimes you have to live some situations like that to improve."

City's top scorer Sergio Aguero has served a three-match domestic ban this season while accumulating 13 goals for striking Winston Reid with an elbow during August's 3-1 win over West Ham.

Fellow forward Nolito was sent off in the closing stages of the 4-0 triumph against Bournemouth last month having headbutted Adam Smith and the Spain international received a yellow card for a similar offence at The Hawthorns.

The 30-year-old has five goals in City colours, but told a pre-match news conference he must curb an unwelcome tendency to loose composure in the heat of battle - something his team-mates can scarcely involve another demonstration of against Barcelona.

"Yes, in that aspect here it is a strong game that you play," said the Spain international, who joined City from Celta Vigo during the close-season.

"I have no intention to hurt any other player.

"Obviously I have to show an example to other players and children and hopefully it won't happen again."

One area where Guardiola's own temper appeared slightly short at a pre-match news conference was regarding the future of Yaya Toure.

At the beginning of a question regarding the latest comments from the exiled midfielder's agent Dimitri Seluk, he replied: "No answer."