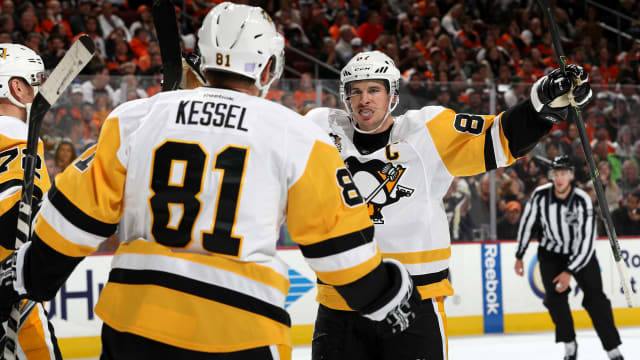 The Montreal Canadiens survived to beat the Toronto Maple Leafs as their winning streak stayed alive, while reigning NHL champions the Pittsburgh Penguins were led by captain Sidney Crosby against the Philadelphia Flyers.

On Saturday, the Canadiens overcame the Maple Leafs 2-1 in an all-Canadian affair to make it seven successive wins.

Shea Weber was the match-winner for Montreal, breaking the deadlock in the third.

Back to full fitness, Crosby scored twice to lead the Penguins past the Flyers 5-4.

There was no such luck for the Detroit Red Wings, whose winning streak came to an end against the Boston Bruins.

Weber's power-play goal lifted the Canadiens to yet another win on Saturday.

With 7:24 played in the third and final period, Weber scored on a four-on-three power play in Toronto.

Carey Price made 37 saves for the Canadiens, who were pegged back by the Maple Leafs three minutes earlier in the third.

Crosby and Malkin were the heroes for the Penguins in Philadelphia.

Malkin scored the game-winning goal in the third period as the Penguins won for the first time on away ice this season.

The Flyers, who have lost back-to-back games, were led by Jakub Voracek's two goals.

Shea Weber has a nearly unstoppable cannon of a slap shot. pic.twitter.com/enc0eIrdPH

An absolutely stellar @mnwild goal. Even better that it was shorthanded. pic.twitter.com/WoaDvAjTIU

All good things must come to an end and that was the case for the Red Wings, who lost 1-0 to the Bruins.

Goalie Devan Dubnyk made 29 saves in the Minnesota Wild's 4-0 rout of the Dallas Stars. He has now recorded three consecutive shutouts.

The St Louis Blues edged the Los Angeles Kings 1-0, the New Jersey Devils trumped the Tampa Bay Lightning 3-1, the Colorado Avalanche downed the Arizona Coyotes 3-2, the Washington Capitals saw off the struggling Vancouver Canucks 5-2, while the San Jose Sharks were 4-1 winners over the Nashville Predators.

STREAKING OILERS LOOK TO MAKE IT SIX IN A ROW

The Edmonton Oilers host the Ottawa Senators amid a five-game winning streak on Sunday. Elsewhere, the Red Wings meet the Panthers and the Chicago Blackhawks go head-to-head with the Kings.