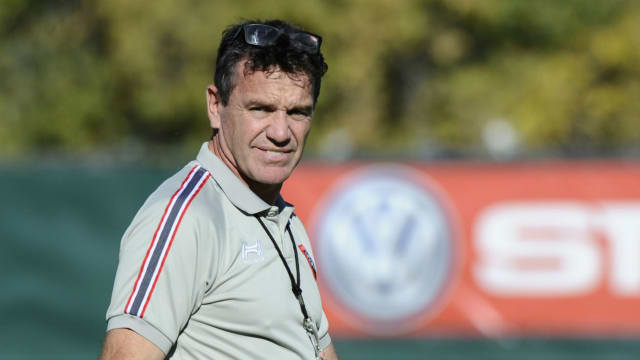 Mike Ford's reign as Toulon head coach got off to a dream start as the three-time European champions hammered Grenoble 42-12 to take over as Top 14 leaders.

Ford was promoted to replace Diego Dominguez this week and the former Bath boss watched his side run riot to claim a bonus-point victory at Stade Mayol on Saturday.

Toulon outscored their struggling opponents by six tries to two in a one-sided encounter, with Mathieu Bastareaud and Mamuka Gorgodze going over in the first half either side of a penalty try.

Jocelino Suta and Axel Muller also dotted down following another penalty try in an impressive start to a new era at Toulon.

Montpellier are level on 27 points with Toulon and Clermont Auvergne at the summit after a last-gasp Ben Botica penalty snatched a 12-11 home success against La Rochelle.

Uini Atonio scored the only try of the game early on for the high-flying La Rochelle and two Brock James penalties gave them an 11-9 lead at the break, with Francois Steyn successful from the tee on three occasions for Montpellier.

La Rochelle looked set to hold on for a hard-fought win, but former Harlequins fly-half Botica held his nerve to send a three-pointer through the posts in time added on.

Champions Racing 92 scored 10 unanswered points in the second half to win 16-3 at bottom side Bayonne, while Stade Francais and Toulouse beat Lyon and Pau respectively.