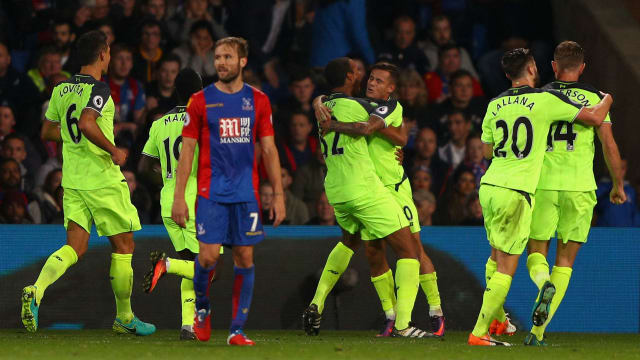 Liverpool edged another six-goal thriller at Crystal Palace 4-2 in a game that owed its thrilling nature to the Reds' wild inconsistencies.

Palace at Selhurst Park remains a fixture to strike fear into the hearts of Liverpool supporters after the costly 3-3 draw in 2014 that sent Brendan Rodgers' Premier League title hopes up in smoke.

Jurgen Klopp's current vintage are hinting that another tilt at the trophy could be on, and hanging onto three points here could end up being crucial.

Philippe Coutinho was at the heart of Liverpool's exceptional attacking and he started a flowing one-touch move that Emre Can finished to open the scoring.

Dippy defending from Dejan Lovren cost his side a pair of James McArthur goals, but he scored in between and defensive partner Joel Matip also got in on the act in a pulsating first half.

Palace pushed on after the break and had three strong penalty appeals denied before Roberto Firmino latched onto a brilliant Jordan Henderson ball to keep the Reds level on points with table-toppers Manchester City and Arsenal, however Klopp must surely address his side's slapdash backline if they are to sustain a challenge.

Only Pep Guardiola's side have scored as many goals as the Reds this season, although Liverpool's first-half performance was a microcosm of their season so far, marrying some thrilling attacking vibrancy with panic-wracked defensive insecurity.

Lovren and Alberto Moreno especially summed up the possible quandary facing Klopp, although the Spaniard's first major contribution was superbly teeing up Can's clinically taken opener with a volleyed pass.

It was then Lovren who took centre stage, initially for all the wrong reasons as he scooped an attempted clearance upwards and backwards, with McArthur on hand to nod past the onrushing Loris Karius, but redemption was swift for the defender as he stormed onto Coutinho's corner to thump a header home.

Coutinho was again at the heart of Liverpool's play as he freed Moreno in the left channel and the resulting shot smashed into the upright.

But the left-back's defensive deficiencies were laid bare as he did nothing to stop a Wilfried Zaha cross and McArthur nipped ahead of a static Lovren to equalise again.

Steve Mandanda pushed a Coutinho header onto the post and Sadio Mane skied a six-yard sitter after more probing from the Brazilian.

But Coutinho racked up another assist a minute before half-time as a right-wing corner found the totally unmarked Matip steaming in from deep to plant his first Premier League goal beyond Mandanda.

Benteke tested Karius' reactions with an angled snapshot, before producing a tame shot after exchanging passes with Yohan Cabaye as Palace began the second half with greater purpose.

Referee Andre Marriner waved away a pair of Palace penalty appeals within seconds of each other as the home side's momentum swelled, while Zaha saw a third denied when he tumbled under Can's challenge for a second time.

After 'play on' was signalled, Liverpool crept up the pitch until Henderson, on the halfway line, pierced Palace's entire team with a laser-like throughball and Firmino dinked home a goal of sweet relief for the travelling support.