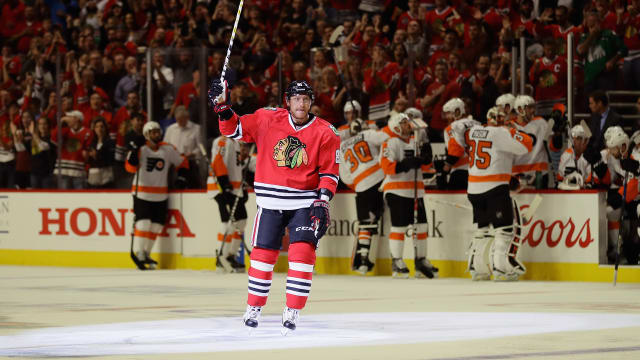 Marian Hossa scored his 500th NHL goal in a Chicago Blackhawks win, while the Tampa Bay Lightning battled to a victory.

Patrick Kane (one goal, three assists) and Artem Anisimov (two goals, two assists) each had four points in the Blackhawks' 7-4 victory over the Philadelphia Flyers.

But the day belonged to veteran right wing Hossa, who made it 500 NHL goals.

Steven Stamkos' late goal tied it up for the Lightning before they claimed a 4-3 shoot-out victory over the Florida Panthers.

Joining the Lightning in remaining perfect were the Vancouver Canucks, while the Los Angeles Kings are winless.

Hossa scored early in the second period for his 500th goal, and it gave the Blackhawks a 4-0 lead.

They would be pegged back to 4-4 before a pair of goals from Anisimov and one from Artem Panarin secured the win.

The Lightning looked set for their first loss before Stamkos scored with 5.5 seconds remaining.

Brayden Point netted the decisive goal in the shoot-out.

Also 3-0-0 are the Canucks, who came from behind to beat the St Louis Blues 2-1 thanks to an overtime goal from Henrik Sedin.

When tight for time, go to Stammer. #FLAvsTBLpic.twitter.com/7qg6MpRlXl

...then the @Canucks scored a beauty in OT to remain undefeated. pic.twitter.com/IYHALpE8gx

The Kings are winless after losing 6-3 to the Minnesota Wild, while the Washington Capitals had a 3-0 win over the Colorado Avalanche.

The New Jersey Devils edged past the Anaheim Ducks 2-1, the San Jose Sharks overcame the New York Islanders 3-2 and the Montreal Canadiens beat the Pittsburgh Penguins 4-0.

The Ottawa Senators won a high-scoring thriller against the Arizona Coyotes 7-4 and the Dallas Stars beat the Nashville Predators 2-1.

The Calgary Flames needed overtime to get past the Buffalo Sabres 4-3 and the Edmonton Oilers claimed a 3-2 win over the Carolina Hurricanes.

MATTHEWS BACK IN ACTION

Auston Matthews and his Toronto Maple Leafs take on the Winnipeg Jets, while the Detroit Red Wings and New York Rangers also do battle on Wednesday.