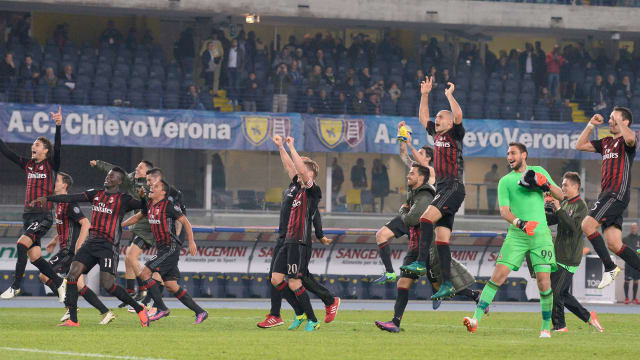 Vincenzo Montella insists AC Milan are "keeping a low profile" despite moving up to third in Serie A with a 3-1 victory at Chievo on Sunday.

Milan made it five games unbeaten as superb strikes from Juraj Kucka and M'Baye Niang in each half put the visitors two ahead, before Dario Dainelli's late own goal completed the win after Valter Birsa's 75th minute free-kick had briefly given Chievo hope.

The Rossoneri next face a tantalising clash against league leaders and champions Juventus at San Siro.

Head coach Montella believes the victory over Chievo demonstrates Milan's potential, but stopped short of saying they are title contenders ahead of next Saturday's key contest.

"I can feel the air of Europe now," Montella told Mediaset.

"On Saturday we play against Juve, one of the best teams in Europe.

"Is it a Scudetto clash? Certain situations are not for us, we are keeping a low profile. Milan have been out of Europe for too long.

"I see the lads smiling now, as they needed confidence and good results help."

Montella felt that his side deserved the win after withstanding an early onslaught from their hosts.

"It was a strong start from Chievo and we were not fluid enough, so I was not happy," he said.

"After the break I feel we did enough to deserve the victory, though we could've finished it off earlier.

"It's a deserved win against an excellent Chievo side that caused us real problems."