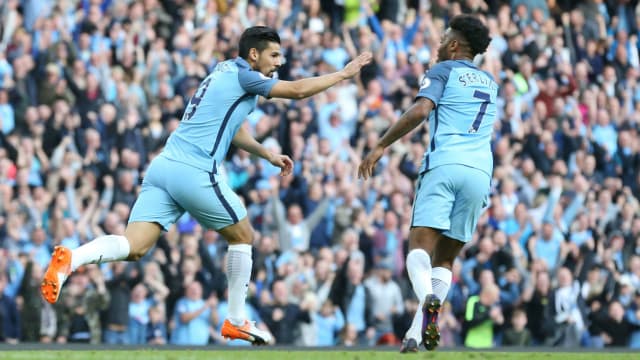 Manchester City missed two penalties but still came from behind to earn a 1-1 draw at home to Everton and stay top of the Premier League on Saturday.

City manager Pep Guardiola, perhaps with a trip to face his former club Barcelona in the Champions League on Wednesday in mind, opted not to start Sergio Aguero after his exertions with Argentina during the international break.

Guardiola also set up his team with three at the back and while those selection gambles could not be said to have backfired - City dominated possession and controlled proceedings for much of the game - they were at risk of suffering a second successive league defeat when Romelu Lukaku put Everton ahead against the run of play at Etihad Stadium, either side of missed spot-kicks from Kevin De Bruyne and Aguero in the first and second half respectively.

Fortunately for Guardiola, Nolito came off the bench to head home the equaliser on his 30th birthday and salvage a point for the league leaders, ruining the exploits of Everton goalkeeper Maarten Stekelenburg, who saved both penalties during an inspired performance to spare the blushes of hapless team-mate Phil Jagielka, at fault for both spot-kicks.

After Guardiola's reunion with Barca at Camp Nou, City's assault on the Premier League title will resume at home to Southampton, while Everton are next in action away to Burnley.

City dominated possession throughout the first half but struggled to create clear-cut opportunities. The lively Leroy Sane was the first to go close, drawing a block from Stekelenburg at the near post four minutes in and later had an optimistic penalty appeal waved away by referee Michael Oliver.

De Bruyne and David Silva also threatened from range, as Everton largely succeeded in frustrating their hosts, without managing to wrest control of possession from Guardiola's team.

The visitors were restricted to sporadic counterattacks in reply, Yannick Bolasie and Gerard Deulofeu both failing to make the most of rare forays forward.

A golden opportunity for City to break the deadlock was spurned with two minutes remaining in the half, Stekelenburg saving De Bruyne's penalty after Jagielka clumsily tripped Silva in the area.

Everton finally tested Claudio Bravo early in the second half, Deulofeu cutting in from the left and drawing a save from the Chile goalkeeper with a dipping strike.

Kelechi Iheanacho's last noteworthy involvement saw him go close with a back-heel flicked attempt at the near post, before the young Nigerian forward was removed for Aguero in the 56th minute.

For all City's dominance of possession, it was Everton who found the back of the net first with a classic counterattacking move.

Idrissa Gueye picked out Bolasie with an inch-perfect clearance and the forward, one of the visitors' best players throughout, demonstrated considerable strength to get there first and flick the ball on to Lukaku.

The Belgium international had only Gael Clichy to beat and went past him with ease before firing a low strike beyond Bravo.

City should have equalised six minutes later, Jagielka giving away another penalty with a heavy challenge on Aguero, only for the Argentine to see his tame effort kept out by Stekelenburg.

Stekelenburg was not finished there, denying the substitute again from open play just moments later.

He could do nothing about the equaliser, though, Silva given too much space down the left and picking out compatriot and birthday boy Nolito, who came off the bench to draw City back on level terms by heading home from close range.

De Bruyne could have won it for City in the 82nd minute, drawing a tremendous diving save from Stekelenburg with a deflected shot from long range.

Nolito had a speculative penalty appeal dismissed by Oliver with two minutes remaining in normal time, while fit-again Vincent Kompany made his 300th City appearance, coming off the bench in injury time to feature in the Premier League for the first time this season, but there was to be no dramatic late winner for either team.