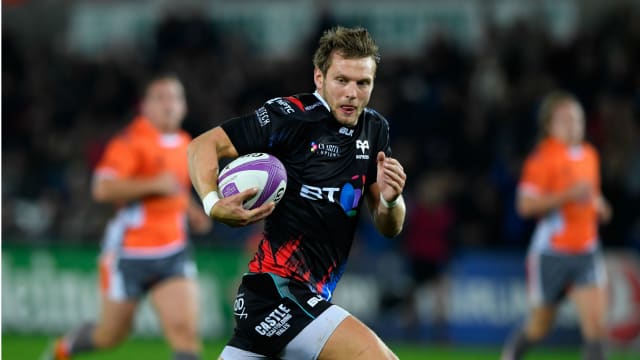 The Ospreys kicked off their European Challenge Cup campaign with a 45-0 demolition of Newcastle Falcons on a strong opening night for the Welsh regions.

Wales has just one representative in this season's Champions Cup, the Scarlets, but victories for the Ospreys, Cardiff Blues and Newport Gwent Dragons represents a promising start to continental competition.

The Ospreys crossed for seven tries as they ran riot against a much-changed Newcastle outfit in Swansea, with Dan Biggar, Rhys Webb and Ashley Beck all going over in the first half.

Scott Baldwin delivered the bonus point with a fourth try after the break, before Justin Tipuric and a Keelan Giles double increased the gap.

Biggar's five conversions from seven attempts only added to a miserable night for the visitors, with the Ospreys now level on points with Lyon at Pool Two's summit.

Having led by just three at the interval, Lyon ran in three tries as they added 23 unanswered points to their tally.

The Blues' Challenge Cup push started with a 33-20 Pool Four win at Premiership strugglers Bristol, whose focus for now will surely be on top-flight survival.

The men from the Welsh capital scored two tries in each half to emerge with maximum points from their trip to Ashton Gate.

In the day's remaining fixture, the Dragons put their disappointing Pro12 form to one side to pick up a 37-16 bonus-point victory over Brive.

With the sides locked at 13-13 at half-time, last season's semi-finalists clocked up four tries in the space of 11 second-half minutes at Rodney Parade to register a convincing Pool Three win.