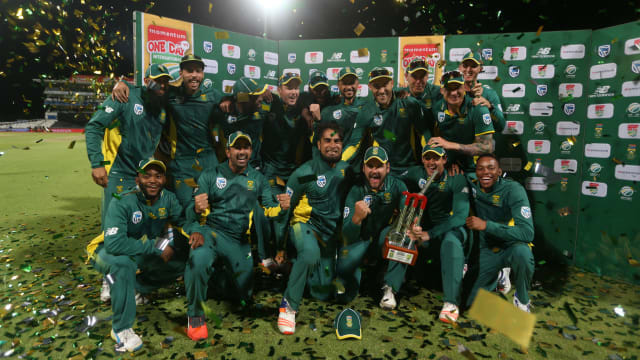 Faf du Plessis says he was incredibly proud to have captained South Africa as they became the first team to whitewash Australia in a five-match one-day international series on Wednesday.

The Proteas took a 4-0 lead to Newlands and set an imposing target by reaching 327-8 in the first innings, with Australia only able to make 296 all out in reply.

David Warner scored a sensational 173 off 136 balls, but it was not enough to stop the tourists succumbing to a disappointing 31-run defeat.

Stand-in skipper Du Plessis admitted it was an unexpected result, but one that supplied a "special" feeling and made him "very proud".

"It's really special. We as a team before the series obviously didn't expect 5-0. We wanted to beat the Aussies, but when we got to 3-0 in Durban it was important to ensure we didn't take our foot off the gas," he said.

"This group of players wanted to make history and we did that today, so it's a special feeling. As always these things won't make as much [impact] when we're sitting here now, but I'm hoping tomorrow [to] wake up and going forward this will be an incredible team effort and team achievement that will last a long time.

"I'm incredibly proud to sit here and be captain of a side that's done that, but for me the greatest thing is we were a team right through the series."

After Australia claimed the early scalps of opening duo Quinton de Kock and Hashim Amla, as well as Du Plessis, JP Duminy and Rilee Rossouw mounted a 178-run partnership for the fourth wicket that proved crucial to the win.

The captain suggested it was a further display of the Proteas' great strength in depth, which proved too much for the tourists.

"Today was a sensational performance. The great thing for me about today was once again we had different guys standing up. JP batted really well and Rilee had a really good innings. That was an amazing partnership," he said.

"David Warner played a really good innings but we were too good on the night once again. I'm proud of everyone right through this series and the performances they've put up against a strong Australian team, but once again it was a good, composed performance."