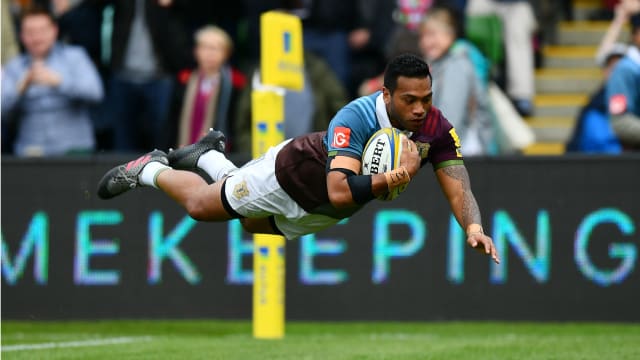 Harlequins battled to a welcome Premiership victory over Northampton Saints on Saturday, winning 20-9 at The Stoop.

Quins came into the weekend with only top-flight new boys Bristol keeping them off the foot of the table, having lost all three of their away matches this season.

However, after kicking off their season with a win over Bristol at Twickenham, Quins have now registered back-to-back victories on their traditional home turf, with one try enough to leave Saints with two wins from six matches.

Nick Evans recovered from injury to start for Quins, but his wasteful kicking proved costly in an opening period that saw the hosts dominate possession.

The fly-half missed with three of four attempts from the tee, but Alofa Alofa sprinted down the left flank to score his first try for the club and ensure Quins held a narrow 8-6 advantage at the interval.

Stephen Myler had moved clear of Jonny Wilkinson into fifth - behind Evans - on the all-time Premiership scoring list with the first of two successful penalty kicks, but a pair of late misses cost his side an unlikely half-time lead.

Tim Swiel replaced Evans at the break and opened his account within seven minutes of the restart, before Quins had a try ruled out for obstruction by Tim Visser.

But Swiel's unerring accuracy with the boot saw John Kingston's side open up an 11-point lead, lifting Quins above Saints to eighth in the table.

Gareth Steenson squandered a chance to clinch victory for Exeter Chiefs with a late missed conversion in a 27-27 draw with Gloucester - the number 10 was subsequently recognised on the pitch for having passed 2,000 points for the club.

Telusa Veainu crossed for a stunning solo try to help Leicester Tigers to a 34-13 victory over Worcester Warriors, while Bristol were dealt another early blow in their bid for Premiership survival.

Newcastle Falcons ran in three tries to go in at half-time with a 19-0 lead at Kingston Park, and Bristol's 14-point response after the interval was not enough to avoid falling to a 19-14 defeat, leaving them rooted to the bottom of the table on two points.