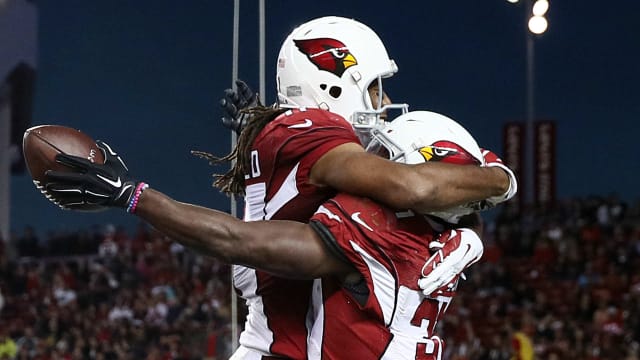 The Arizona Cardinals claimed a much-needed 33-21 win over the San Francisco 49ers in the NFL on Thursday.

The Cardinals (2-3) scored 17 points off turnovers for an ugly victory at Levi's Stadium.

Drew Stanton got the start at quarterback for the Cardinals with Carson Palmer dealing with a concussion.

Stanton was not sharp, going 11 of 28 for 124 yards, though he did throw a pair of touchdown passes and did not turn the ball over.

Both TD passes went to Larry Fitzgerald, who finished with six receptions for 81 yards.

San Francisco's Blaine Gabbert also had trouble finding open receivers. Gabbert was 18 of 31 for 162 yards with a touchdown and two interceptions and ran for 70 yards on 10 attempts with a late touchdown.

WINNING AT THE LINE

The Cardinals played much of the game in San Francisco's backfield with seven sacks and five tackles for loss. Second-year linebacker Markus Golden was a one-man wrecking crew with 10 tackles, two for loss and a pair of sacks. He also hit Gabbert another three times.

But it was a tipped pass at the line of scrimmage that swung momentum toward the Cardinals early.

Chandler Jones batted Gabbert's pass into the air and Calais Campbell snared it for an interception.

Blaine Gabbert's pass is tipped...
And PICKED by @Campbell93!

Stanton hit Fitzgerald on the very next play for a 21-yard touchdown to get the Cardinals on the board. Campbell's interception was out of the two-minute warning and three plays after Hyde was penalised for taunting.

While Fitzgerald found the end zone twice, it was running back David Johnson who did the most damage for the Cardinals. Johnson ran for 157 yards on 27 carries and caught three passes for 28 yards. After San Francisco's Chris Davis fumbled the opening kick-off of the second half, Johnson scored on a four-yard run to give the Cardinals a 14-7 lead with 12 minutes, 45 seconds remaining in the third quarter. He added a second rushing touchdown in the fourth quarter to put the game out of reach.

Johnson's 157 yards are a season-high in the NFL so far. It was the second 100-yard rushing game of Johnson's two-year career. He ran for 187 yards last season in a win over the Philadelphia Eagles, who were coached by current 49ers coach Chip Kelly.

"Drew did a great job of stepping in. Nobody pressed," Fitzgerald told CBS Sports. "Just being able to get a win gives you so much confidence. It wasn't just one group that got it done. Everybody put their hands in the pile."

The Cardinals, thought to be Super Bowl contenders at the beginning of the season, needed the win to salvage their season. Dropping to 1-4 would have made it nearly impossible to make the playoffs. Only six percent of teams to start 1-4 since the playoffs expanded in 1990 have reached the postseason. That does not bode well for the 49ers, who are at Buffalo a week from Sunday.