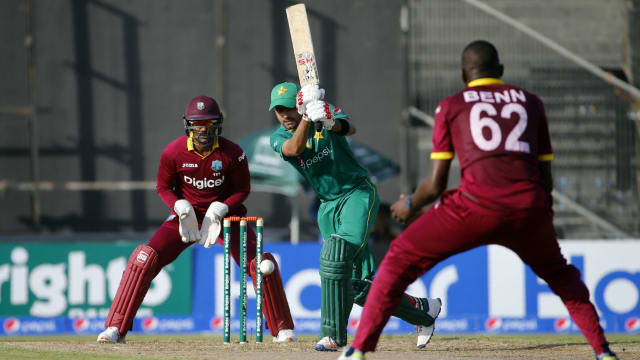 Shoaib Malik's fireworks and a second career-best show in as many matches from Babar Azam helped Pakistan to a 59-run win over West Indies and an one-day international series victory.

Babar had scored 120 - his maiden international 50-over ton - in the first match of the series, but went even better on Sunday once again in the familiar surrounds of the Sharjah Cricket Stadium, scoring 123 as Pakistan racked up an imposing 337-5.

Despite the 21-year-old's impressive efforts, the undoubted star of the innings was Malik, who smashed six sixes in an 84-ball 90 - including one which deposited Windies spinner Sulieman Benn out of the ground.

In response, West Indies could only manage 278-7 from their innings, as three run-outs stifled their attempts to pull off the chase.

Pakistan captain Azhar Ali won the toss and elected to bat first, a decision quickly justified as he and Sharjeel Khan took opposite number Jason Holder's second over for 22 runs.

Ali and Khan fell in the space of three balls, but Babar and Malik were imperious in their wake.

Having taken 11 overs to combine for 50 runs, the pair began to press the accelerator - Malik especially - and the 27th over was truly sensational as the veteran all-rounder obliterated Benn, his last of three maximums travelling 103 metres on its way onto the street, requiring retrieval from a brave fan.

Malik fell short of a ninth ODI century when he played on, but Babar was not to be denied, reaching three figures with an easy single and celebrating the milestone with a maximum from his next ball.

Sarfraz Ahmed grabbed 60 runs from 47 balls to take the hosts well beyond 300, a figure the Windies have never chased in 50-over cricket.

A stabilising second-wicket partnership between Darren Bravo (61) and Kraigg Brathwaite(39) gave West Indies' big-hitters a chance and Marlon Samuels' 52-ball 57 may have frayed Pakistan nerves in frantic unions with Bravo and Denesh Ramdin (34).

Wahab Riaz (2-48) bowled both Samuels and Ramdin to turn the tide firmly in Pakistan's favour, with the powerful Kieron Pollard (22) and Carlos Brathwaite (14) unable to drag out something miraculous.