Balotelli scores dramatic late winner - and then gets sent off 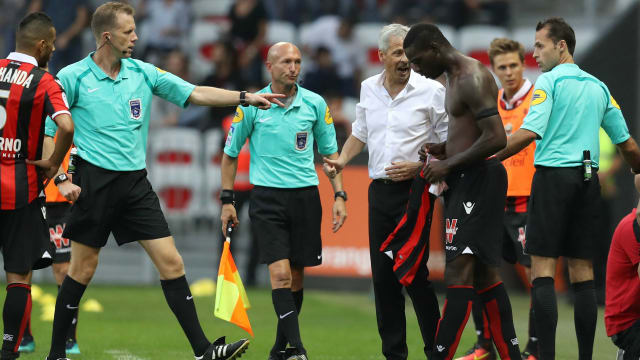 Mario Balotelli scored a brilliant late winner before being sent off in stoppage time against Lorient as Nice moved top of Ligue 1 with a dramatic 2-1 victory.

The 86th-minute strike, a superb finish into the top corner after being set up by Wylan Cyprien flick, gave Lucien Favre's men a win that moved them back above Monaco at the top of the table.

That looked like the perfect response from Balotelli after he was left out of Giampiero Ventura's Italy squad for the World Cup qualifiers against Spain and Macedonia despite a start to the season that has seen him score six goals in all competitions.

However, after being booked for removing his shirt as he celebrated the winner, the former Liverpool striker controversially received a second yellow card in the second minute of stoppage-time, apparently for moving his head in the direction of opponent Steven Moreira, who had just conceded a foul.

The late drama came after Lorient had pegged back Nice after they had taken a lead through Ricardo Pereira's low strike, which goalkeeper Benjamin Lecomte should have kept out on 11 minutes.

The visitors also had a shot deflect off the crossbar, but it was Balotelli who went on to steal the limelight.