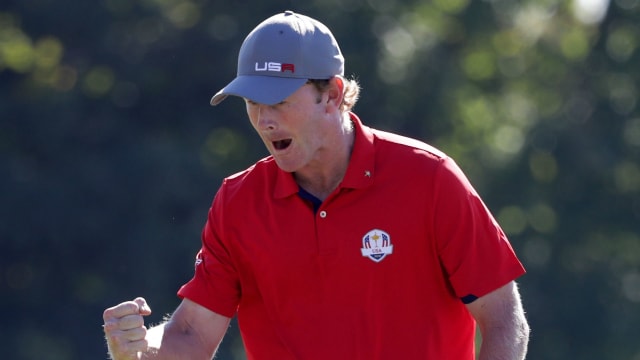 The hostility directed at Ryder Cup rookie Danny Willett did not get out of hand at Hazeltine on Friday, according to the USA's Brandt Snedeker.

Masters champions Willett had his debut at the prestigious biennial event marred by the publication of a controversial article written by brother Pete, in which he expressed unfavourable opinions about American golf fans.

Willett's appearance on the first tee was marked by more than a few boos and, playing alongside Martin Kaymer, he went on to lose 5 and 4 to Snedeker and Brooks Koepka.

Asked in a news conference if the hostile reception experienced by the Englishman made him uncomfortable, Snedeker replied: "Maybe a little bit."

The 35-year-old added: "But you get that pretty much every week, it seems like, on Tour on the weekend. You get in the last couple groups, people don't want you to win or whatever it may be, you hear some yelling. It wasn't - I didn't think it crossed the line by any stretch of the imagination today."

According to Snedeker, the two American players and their captain, Davis Love III, were ready to step in if the behaviour of supporters took on an ugly edge.

"I thought Brooks and I, Davis was out there quite a few holes trying to quash it if it got out of control," he said.

"I don't think it really ever did."

Snedeker and Koepka are back in action against Henrik Stenson and Matt Fitzpatrick in the foursomes early on Saturday, while Willett has not been selected by European captain Darren Clarke for the morning session.