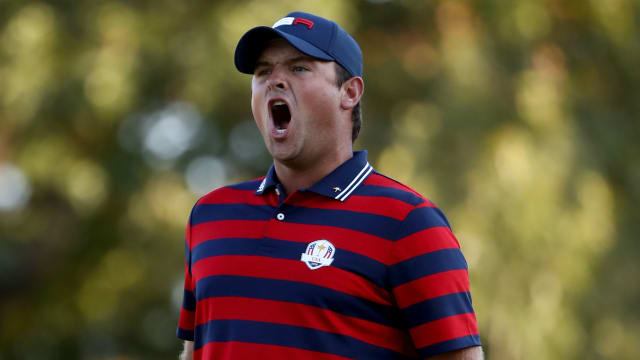 Davis Love III feels Patrick Reed is "built for the Ryder Cup" after choosing to send out his top performer first to tackle Rory McIlroy in a heavyweight opening singles match at Hazeltine on Sunday.

Reed, playing with regular partner Jordan Spieth, was the undisputed star in Minnesota on Saturday, holing six birdies and a spectacular eagle to beat Justin Rose and Henrik Stenson 2 and 1 in the last fourballs match.

And Reed will hope to set the tone again on the final day, European captain Darren Clarke having opted to start with in-form world number three McIlroy.

"We got what we expected from Darren, and I'm sure he didn't expect anything different from us," Love told a news conference when asked about the powerhouse showdown.

Love was the captain when Europe came from 10 - 6 down to win in Illinois four years ago, a turnaround dubbed the 'Miracle of Medinah'.

And while the hosts have attempted not to dwell on that now infamous collapse, the USA's skipper confirmed painful past experience informed the order of players he selected for Sunday's singles.

"We keep looking forward," he said.

"So yeah, we talked about it, and we threw a line-up out there based on that."